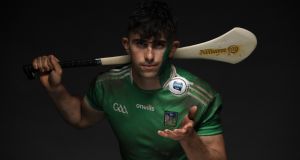 Aaron Gillane of Limerick, who meet Waterford in this Sunday’s Division 1 decider at Croke Park at 2pm. Photograph: Brendan Moran/Sportsfile

Aaron Gillane is a creature of habit, a slave to routine, and he’ll begin Allianz League final day with a breakfast he’s had many times before: eggs and bacon.

His mother memorably drove home from Dublin the night before last August’s All-Ireland final to prepare it for him the following morning.

Asked if she’ll have the apron on again this Sunday morning, Gillane lit up. “She will, and you’re all welcome if you want,” the forward smiled.

There’s another routine that Gillane likes to stick to: winning games regularly, something he’s been surprised to hear people suggest mightn’t actually be the wisest idea.

According to some, Limerick may have been better off taking a more low-key journey through spring, avoiding this weekend’s final and conserving their energy for the more important business of defending the All-Ireland.

That pursuit of excellence is the routine that Gillane loves most. For him, it makes little sense not to go as hard as he can, for as long as he can in every single game.

“It’s a huge game this weekend, it’s a national title, you want to win as much as you can,” he said. “It’s a short enough career. Especially now that we’re in the final, you want to finish it off. League finals are for winning and winning is a habit. We want that winning habit before we start the Championship.”

Gillane reported that Declan Hannon, last year’s All-Ireland winning captain, and experienced forward Shane Dowling, should both be available for the Croke Park date with Waterford after missing the semi-final win.

I was stupid, lost the head and it was nice to be able to chat with Caroline

“They trained last night [Tuesday], they were flying it, so we’ve virtually a full panel,” he said. “Richie McCarthy did his cruciate in a club game a few weeks after the All-Ireland and he’s back doing a bit of straight line running now. He’s at training the whole time.”

Tony Óg Regan, the former Galway hurler, is also part of the group now, having replaced Caroline Currid as the team’s sports psychologist.

‘Playing on your mind’

“It’s hard to describe what they do,” said Gillane. “They’re there if you want to chat with them, or if there is anything playing on your mind. If you’re playing out scenarios in your head, that something [negative] is going to happen in a match, say. Then it’s someone who is there to talk to. It’s hard to explain, you’d need to do a session yourself.”

Gillane said he found Currid helpful to speak to after his dismissal for what was adjudged to be a dangerous pull in last year’s Munster championship game against Cork.

“I was stupid, lost the head and it was nice to be able to chat with Caroline,” he said. “She could tell me, ‘Oh, you’re going to be getting attention now because people will think they can get you sent off easily.’ As long as I knew that going into games, I knew what to expect. She really helped me in that regard.”

5 Time decided football was finally over for Brees. Not for Tom

Simi Singh stars as Ireland beat UAE to draw ODI series 13:50
Doubts continue over Solskjær’s tactics against high-class opponents 13:16
Waterford women’s football association ‘first in Ireland’ to own lands 13:00
Time decided football was finally over for Brees. Not for Tom 12:53
Phil Neville to step down as England head coach with immediate effect 12:23
Crossword Get access to over 6,000 interactive crosswords