Division Three: Donal O’Hare seals it late on for Down 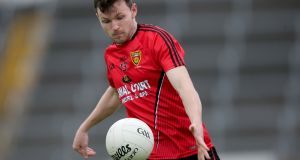 Down’s footballers snatched victory with a free from midfield by Donal O’Hare deep in injury time to claim both points at Netwatch Cullen Park, a result which left the home supporters and management with a serious sense of grievance.

Cork referee James Bermingham had to be escorted from the field at full-time and was confronted by Carlow manager Turlough O’Brien, who felt his team had been on the wrong end of some harsh decisions.

After a forgettable opening half Carlow led 0-7 to 0-4, having played with the significant wind, full forward Darragh Foley hitting six successive points from frees.

Down were level by the 45th minute with points from Conor Poland and two from O’Hare. When the Ulster side went 0-10 to 0-7 ahead it looked as if they were set for victory but a well struck Carlow goal on 67 minutes from centre back Eoin Ruth levelled matters at 1-10 to 0-13.

The teams then traded points before O’Hare held his nerve to give Paddy Tally’s men both league points.

Down had two players red carded for second yellow card offences in the second half – Paul Devlin and Kevin McKiernan – while Carlow’s Shane Redmond was also issued with two yellow cards.

This narrow win keeps Down at the top of the Division Three table with a home tie against Louth up next. A draw would have made Carlow safe from relegation, which added significantly to the home supporters’ frustration.

Two second-half goals proved to be the difference as Laois edged a typically tense and tight midlands derby in Tullamore on Saturday.

A great Evan O’Carroll goal after a fine catch in the 48th minute gave Laois a 1-9 to 0-10 lead at a crucial stage in the game. With the wind at their backs in the second half, substitute Paul Cahilane struck for a second goal eight minutes later to really put them in the driving seat.

Laois led by 2-11 to 0-11 inside the closing 10 minutes but Offaly rallied bravely. They got four on the trot, three from Bernard Allen, to reduce the arrears to two points but never looked like manufacturing a goal and a closing free from Cahilane got Laois across the line.

Laois had made the better start and led by 0-4 to 0-1 after 11 minutes before Offaly began to take advantage of the wind. They got seven of the next eight points to lead by 0-8 to 0-5 at half time. But the wind was strong and it was clear that Laois would come back into it after the interval.

The win puts Laois firmly in the promotion race with next weekend’s games deciding the issue.

A strong second-half performance saw Longford get the win they required to consolidate their position in Division 3 next year against an already relegated Sligo side.

With nothing to lose Sligo took the game to Longford in the first half and held a three-point lead at the break. Longford were a different proposition in the second half with midfielder Darren Gallagher instrumental in the win; scoring their first goal in the 38th minute.

Gallagher’s goal gave Longford the lead for the first time since the opening minute. Substitute Nigel Rabbit got the second goal in the 63rd minute to put six between the sides.

Both sides ended the game with 14 men; Sligo’s Pat Hughes got a second yellow in the 38th minute while 20 minutes later Michael Quinn, already on a yellow card, got a black and was sent off.

It was Quinn who opened the scoring inside the first minute. Sligo went ahead with points from Adrian Marren and Niall Murphy (free). It was tit-for-tat with Sligo keeping their noses in front and They went two ahead in the 18th minute with a point from a mark by Marren.

Sligo were ahead by four in the 29th minute with a fine score from Pat Hughes. Darren Quinn and Gallagher (free) replied with points for Longford before a great Murphy point gave Sligo a three-point lead at the interval.

Longford went in front in the 38th minute when Gallagher found the back of the net from a tight angle and from there on the Midlanders were able to see out the game and claim a valuable three points.

The Division three clash between Louth and Westmeath in Drogheda was called off due to the weather conditions.