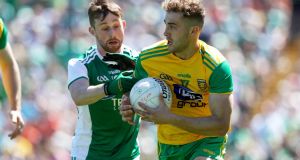 Still so young, still so fast improving, Stephen McMenamin can view Donegal’s return to Division One of the Allianz Football League for 2020 like a natural progression. A standout minor in 2014, under current manager Declan Bonner, McMenamin would have been more surprised if promotion wasn’t secured.

Only what has made one difference in their swift return to the top flight is Stephen Rochford, who came on board as their football coach not long after stepping away from his role as Mayo manager last summer. One team’s loss is often another team’s gain.

“I think Stephen Rochford has been a massive bonus for us this year,” says McMenamin. “All the knowledge he has, he is just aware of the tactics that need to be brought in. And he has bought into it 100 per cent, massive addition to the backroom team. Him and Karl Lacey work very well together, and it is just good to have him in.

“Someone of his pedigree coming into the backroom team and that drives players on to impress him as well. He is a new man coming in and he is not going to be biased, he is going to see whoever is playing well and he is going to play them. That is what I like about him too, he is a completely new face there. He sees who is training hard and who is not and the team is picked on that, whoever is training well, plays. No matter who you are. He would see that a lot better than Declan or Karl, because they have been there.”

Rochford’s role so far has been to observe games from the stand- the latest being Sunday’s 1-20 to 0-10 win over Kildare which sealed their promotion: “You probably see more from up there, he is aware of everything, and sends the messages down, whatever he sees,” reckons McMenamin. “Everyone has massive respect for him, from what he did with Mayo. They fell short but everyone knows what he is capable of.

“I would 100 percent believe that he can bring us there, and I know that he 100 percent believes in us because he is coming from Mayo three days a week and why would you be doing that unless you believed in us? That’s why all of us have a good opinion of him.”

Donegal still have a Division Two final against Meath on Saturday evening in Croke Park to look forward to, but there’s plenty of positives to take from their season to date. Still only 21, studying construction management at DIT on Bolton Street, McMenamin was called into the senior panel straight out of minor, in 2014, after losing that year’s minor final showdown to Kerry (the first of five-in-a-row for The Kingdom).

“There’s a good bunch of us minors there at the minute, we have Declan in too, so he knows everyone in there. To be fair, there’s a lot in there training, a lot of us starting, it’s a good bunch, and then you have the mix in then with the older boys like Michael Murphy and Neil McGee and Leo McLoone. It’s a good mixture. Those boys would soon keep your feet on the ground too, they know what they are at.”

Oisin Gallen also hit four points from play against Kildare, the 19 year-old still eligible for the Under-20 grade: “He has a big decision to make whether he is going to stay on or go with the Under-20s. I don’t think that’s fair on him, but he’s a class player, he’s a class act too.”

McMenamin is currently one of seven Donegal players based in Dublin, plus Niall O’Donnell also in Maynooth: “So two car-loads go up and down, we would share lifts and we would change the driver around. It’s easier on the body too, because you are not driving the whole time.”

A short spin to Croke Park on Saturday evening, at least.