Jamie Barron and Waterford eager to show their maturity 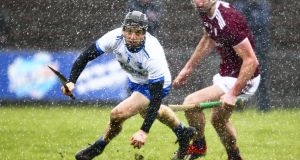 Jamie Barron gets away from Galway’s Gearóid McInerney. “We’re after slipping up in a few Munster finals, a league final and an All-Ireland final so the time comes when the penny has to drop and you have to get over the line.” Photograph: Ken Sutton/Inpho

Back in 2015, after Waterford beat Tipperary narrowly in a dramatic Allianz league semi-final, Derek McGrath talked about what made his up-and-coming young team different.

“We don’t have ego but we have absolute confidence,” said McGrath, who guided the Deise to just their third league title success the following month.

Four major final defeats later – the 2015 and 2016 Munster finals, the 2016 league final and the 2017 All-Ireland decider – McGrath eventually stood aside after the 2018 Championship with some of that absolute confidence surely eroded.

Jamie Barron, twice an All-Star under McGrath, admitted that it’s time for a team that can no longer be labelled up-and-coming to finally start delivering now.

“We’re maturing nicely but the time does come when you have to start producing and winning,” said Barron in advance of Sunday’s league final against Limerick at Croke Park.

“We’re after slipping up in a few Munster finals, a league final and an All-Ireland final so the time comes when the penny has to drop and you have to get over the line. Hopefully those years are behind us now and we can focus thoroughly on getting over the line.”

As arguably the last traditional hurling county to be experiencing an All-Ireland famine, Barron said Limerick’s achievement last year of ending a 45-year wait for MacCarthy Cup success has filled himself and his colleagues with fresh optimism.

“Yeah, 100 per cent, I’d agree with that,” said the 25-year-old Fourmilewater man. “Seeing Limerick do what they did last August, out of all the other teams that could have done it, that’s probably a thing alright where you’d look and say, ‘We can do what they’re doing, we can do what they’ve just done’.

“I think we are probably the last team with a major famine alright. We’ll be giving it everything we have this year to get back there in the final firstly.

“If you can get out of Munster I think you have a great chance with the way the teams are so evenly matched at the minute.

“It takes a lot of luck as well I suppose but hopefully we can get that luck on our side this year.”

Asked if that All-Ireland win has to happen in the next couple of years, while the current group of talented Waterford players are all still together, Barron nodded.

“Hopefully it’ll happen in the next whatever, five years, before then really,” he said. “We are focusing year on year obviously but you’d really want to be thinking, I’d be hoping personally anyway, that we’d get it done within that time frame.”

A more direct approach this year under Páraic Fanning, following the sweeper system favoured by predecessor McGrath, appears to be paying off.

McGrath always claimed that his system was far more nuanced than just playing with an extra back and that pundits simply didn’t get what they were all about.

“I think for Derek’s whole tenure, the most anyone spoke about in terms of Waterford was sweepers, which I suppose we just became immune to in the end,” said Barron.

“Anything that happened, if we won it was the sweeper that done this, and if we lost then the sweeper line was rolled out. So you just couldn’t win with the thing. At the end of the day, it was probably people who didn’t have much of a clue what was actually going on that were saying these things.

“Look, it’s gone for the moment anyway. I suppose other teams are probably still using it and things like that. And we might use it again further down the line as well.”

Barron said it hasn’t been a huge adjustment to return to a more traditional setup.

“It hasn’t been majorly hard to adapt to, playing the 1B games probably helped a lot in that you are not under as much pressure,” he said.

“Maybe trying out a new system that you hadn’t used in five years, and say you’re playing Limerick in your first game, you could be exposed to being beaten by 20 points or something like that, whereas down in 1B I think we had more confidence in ourselves to be able to try out these new things and still get the results.”

Barron was at the centre of a novel play earlier this month when Waterford beat Galway, gathering the sliotar up and tossing it over the bar after Shane Bennett had applied the slightest of touches, which no Galway player had spotted, to a sideline ball.

“It was Páraic Fanning that wanted to do it, I was nearly apprehensive about doing it,” said Barron. “I was like, ‘We’re obviously going to get caught, the referee’s just going to give a free the other way or something’ but he was adamant that it would work and to give it a try. He was delighted with himself, which he was telling us!”