Mayo resurrection continues as they set up final date with Kerry 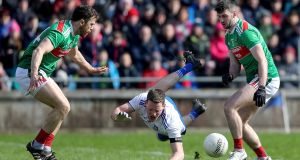 It’s not even Easter and already Mayo are rising from the dead. Written off just a few weeks ago on a dismal night against the All-Ireland champions, James Horan’s men will return to Croke Park next Sunday to contest the league final with Kerry.

They caused a few mild flutters in the closing stages of an engaging end-to-end game at MacHale Park that was characterised by quality scores from the marksmen on both teams. But all of a sudden, they’ll be looking forward to the summer around Nephin.

Two sharp, intricate team goals finished by Kevin McLoughlin and his attempted third which ended up in the net after Rory Beggan’s diving save deflected the ball into the arriving Ryan Wylie, kept Mayo in front to the end.

The home crowd also enjoyed three splendid first-half scores by Fergal Boland, a composed debut for James McCormack from Claremorris, a gargantuan hour from Aidan O’Shea and, most importantly, the sense that Mayo are easing into a higher gear.

This was not an experienced team– Keith Higgins and Lee Keegan were rested and Donal Vaughan was introduced to help steer the ship through the last five minutes, promptly rampaging through for a point on his arrival. But for Mayo, the league has already illustrated that they’ll still be playing football here even after the wild bunch are finally done.

“We changed five or six pretty much per game,” Horan said afterwards.

“We still have Cillian [O’Connor]and Cian Hanley and Seamie O’Shea, Tom Parsons and a load of those guys to come back in yet, it’s hottening up. Delighted with how some of those guys have got on.”

For the second consecutive game, Mayo were forced to change goalkeepers because of injury. David Clarke started the afternoon with a deft and brave stop on Karl O’Connell with the Tyholland man through on goal and about to pull the trigger.

On the half hour mark, Clarke stood under a dropping ball from Conor McManus and didn’t flinch as Darren Hughes did his best freight train imitation. Clarke hit the ground, held the ball and was then ferried off the field to a standing ovation as Rob Hennelly took up residence in goal. Hughes argued the legitimacy of his challenge as referee Derek O’Mahony issued a yellow card.

Malachy O’Rourke made a late call in including Jack McCarron. Safe to say it worked. The rangy left footer was on fire in the first half, popping over points for fun and seemingly playing a personal point-of-the-day game. He finished with 0-7 on the day.

Brendan Harrison, in a brilliant end-to-end showing, kept Conor McManus under wraps for the first half. But the Clontibret wonder still finished with 0-8. It was the usual situation for Monaghan: they almost had to fall into Mission Impossible mode before they finally grit their teeth and worried the landlords.

There was a visible injection of intensity just after half-time and they cut into the 2-7 to 0-6 deficit with four quick points. It was precisely because they were warming to the task that Fintan Kelly drew a red card for clattering into Boland.

Monaghan then fell into another six-point hole before producing a goal from nothing, finished by Hughes: then came the unhappy finish to Mayo’s third goal. Monaghan are never finished though: they were still chasing an equaliser when Paddy Durcan collected a low, driven shot from his own goalmouth in the 75th-minute.

O’Rourke was pleased with the attitude and that results elsewhere had guaranteed Monaghan’s division one status but was frustrated by how hard McManus had to work for his supper. McManus definitely had a strong penalty shout in the 12th minute and, as usual, was smothered for space whenever he took possession.

“ I think just talking to a lot of neutrals, and Mayo people as well were the first to say to me that the referee gave us nothing on the day. I don’t know. I might be biased but I just felt Conor was finding it hard to get any sort of free at all and then at the other end, frees seemed to be given a lot easier.”

Still, this was a game defined by open scoring. Mayo’s day was made all the sweeter by confirmation for the crowd of 13, 287 that Galway had been smote by Tyrone. Mayo, then, get an extra game and a shot at early season honours.

“ We’ve tried a lot of things out and different bits and pieces, a lot if it is working and some of it isn’t, we’ll tweak that and have a crack at it.”

You can bet they will.

1 Record numbers of adults in Ireland participating in sport and walking
2 Munster braced for worst of financial crisis due to Thomond Park debt
3 European clubs must take lessons from financial demise of former greats
4 People who attended illegal match in France are asked to get tested
5 From history to food: Players take chance to focus on life after rugby
Real news has value SUBSCRIBE