‘Mayo bring a higher intensity than almost anyone’ 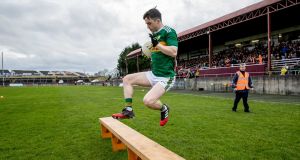 At 27, Paul Murphy is now one of the oldest members of Kerry’s panel. Photograph: Morgan Treacy

In pointing out all the good reasons why Kerry are relishing their latest football league final, Paul Murphy also hits on the problem one: after Sunday, it will be at least 15 weeks, almost four months, before Kerry next face Division 1 opposition.

None of their potential Munster championship opponents are of division one status, the more worrying fact being both Cork and Tipperary are freshly relegated to Division 3 Kerry await the winners of Clare (who just about survived in Division 2) and Waterford (Division 4) on June 1st, the Munster final then set for June 22nd.

If Kerry progress, as expected, it won’t be until the first round of Super 8s on July 13th/14th (at the earliest) before they next meet division one team. Win or lose against Mayo on Sunday (there is no provision for a replay), that’s a long time to kept off their toes.

“It’s unfortunate, it’s not good for Munster football that Cork and Tipp have gone to Division 3” admitted Murphy, speaking at an Allianz League event in Croke Park. “Cork would say that they done the hard work themselves on Sunday (beating Armagh) and that they were unfortunate in how the other result went. We can’t spend too much time thinking about that. Come the summer we’ll be focusing on getting ourselves right for Munster, there’s nothing really more that we can do about that.”

Kerry have strolled through Munster the last few years, and after beating Dublin in the 2017 league final, were caught at least partly cold by Mayo in the 2017 semi-final, which they lost after a replay: did that lack of competition hamper them?

“Possibly yeah, but in fairness Mayo bring a higher intensity than almost anyone and it’s an All-Ireland semi-final. Looking back, maybe we were a little bit under-cooked. We hadn’t probably met that intensity since the league final that year so it probably didn’t help us.”

Meanwhile, their 2019 league campaign has served Kerry perfectly well, the only defeat for new manager Peter Keane being the penultimate-round defeat to Mayo: Sunday offers the perfect chance to make amends.

“It’s been a smooth enough transition,” agreed Murphy, moving from the wing to anchor the Kerry defence this season. “I think a big thing is that everyone was back at the bottom step of the stairs. They had everything to prove to the new management. They were coming in, they hadn’t a team based on who started last year or anything like that. I think even that has driven lads on an extra 10 or 20 per cent. They’re out to get their name in the team, or their name in the panel. I think the performances have benefited from that.”

Given Keane has brought on many of his successful minors, namely Seán Ó Sé (1-50 in his seven games), but also fringe players like Dara Moynihan, and Sunday gives them all the chance for a big game in Croke Park.

“Senior level is a different animal, it’s a step up playing here in Croke Park and to get out here this early in the year and get another game under our belts, it’s very positive,” said Murphy. “We’ve lost a lot of guys through retirement and things like that and a lot of younger lads have come through who’ve have success at underage level but it’s a challenge for them to bring it through to senior. It’s never straightforward for most lads. A good minor doesn’t necessarily make a good senior so they’re trying to make their way and trying to bed themselves into the team. Then Tommy Walsh is also back and had a very good League. He’s a great presence around the dressing room as well, very solid head on his shoulders.

“It probably wasn’t a huge goal of ours setting out, we weren’t flat out concentrating on getting to the league final. It’s a cliche but we were taking it a game at a time and we got a few wins under our belt. After beating Dublin (in the third round), you’re in a good position then, you’re looking up rather than looking backwards staving off relegation. We built on that then a week or two after.

“Against Mayo, they really pushed up aggressively but I think we were more focusing on ourselves that we really need to look for it. You’re making a proper hard run, you’re dying to get on the ball rather than assuming someone else will make this run, so that was probably the biggest thing we took away from it.”

At 27, Murphy is now one of the oldest members of the panel: “Well, David Moran, Peter Crowley, Tommy, Shane Enright, Jack Sherwood, Stephen O’Brien, Mark Griffin, they’re the same year as me. But they’re older so I’ll put them ahead of me as well.

“It’s a completely new panel really from 2014 (when Kerry last won the All-Ireland), a different dynamic in the team. It’s obviously great to have that experience, knowing that you’ve done it in big games but I think it’s a new group and we’re trying to find our own way as a group.

One more good reason for Sunday’s final: David Clifford is back fit and playing: “He’s looking sharp, yeah, played his first game on Sunday after his shoulder surgery. Hopefully he’ll get his sharpness back to an even higher level.”

PATHS TO THE FINAL