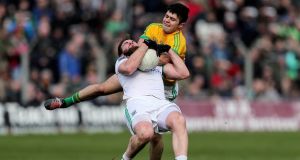 Meath made certain of their return to Division 1 football for the first time since 2006 when brushing aside the challenge of Fermanagh in impressive style at Páirc Tailteann on Sunday.

A draw or even a narrow defeat would have been enough for the Royals but they turned on the style in the second half in front of their biggest crowd of the year to finish clear leaders of Division 2.

The Ernemen needed victory to have a chance of joining them but their hopes were all but over by half-time as they trailed 0-6 to 1-4 after playing with the advantage of a stiff breeze.

The visitors made a whirlwind start to proceedings with Conall Jones lofting over a fine score inside a minute and that was followed in quick succession by points from Ciarán Corrigan, Ultan Kelm and Seán Quigley.

At that stage it looked as if Meath had a battle on their hands. Fermanagh dominated for long stretches of the half but were unable to make it count on the scoreboard and by the end of the half they had tallied 11 wides.

Meath had to wait until 16 minutes for their opening score from Cillian O’Sullivan and they slowly worked their way into the game after that.

They went ahead for the first time when James McEntee and Bryan Menton created the opening for Barry Dardis to find the net on 28 minutes. It was a third goal in four games for Summerhill clubman Dardis, who was used as a goalkeeper during the O’Byrne Cup campaign.

Cillian O’Sullivan and Mickey Newman added to the Meath tally before the end of the half.

Quigley, from a free, ended a 30-minute scoring drought for Fermanagh and Corrigan hit the final point of the half.

A point from Ryan Jones had Fermanagh level within a minute of the restart but a Newman point regained the lead for the home side and they quickly built up a match-winning lead after that.

Bryan Menton with a long-range effort, James McEntee and Dardis added further points to leave it 1-8 to 0-7 after 44 minutes.

There was no way back for Fermanagh after wing back James McEntee netted on 46 minutes to leave it 2-8 to 0-7.

With McEntee, Donal Keogan and Conor McGill outstanding in defence Fermanagh’s scoring opportunities were restricted and they lacked a cutting edge in attack throughout the second half.

Fermanagh’s erratic finishing also continued and they ended with 17 wides. Meath found it much easier to pick off their scores with Cillian O’Sullivan (two), Newman and sub James Conlon adding to their tally.

Corrigan had a goal chance for Rory Gallagher’s men on 63 minutes but his effort was blocked by goalkeeper Andy Colgan. Ryan Jones and Darragh McGurn had late points but they were only consolation scores.

Andy McEntee’s charges have a Division 2 final to look forward to against Donegal, the only team to defeat them in the league campaign. That game takes place at Croke Park next Saturday, with a 5pm throw-in

Mason Jones not interested in being the Welsh Conor McGregor 12:01
Charles Byrnes’ licence withdrawn after runner ‘nobbled’ with a sedative 11:38
JP McManus Pro-Am deferred for a year due to Covid 10:45
James Harden stars as Brooklyn Nets edge Bucks in thriller 09:17
Spanish player says Australian Open quarantine is like prison 09:06
Crossword Get access to over 6,000 interactive crosswords