Galway move within touching distance of another final 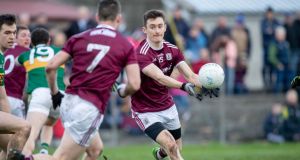 The upside of missing so many players is that others get a chance to put their hands up, for example corner forward Antaine Ó Laoi. Photograph: Morgan Treacy

Galway footballers travel to Omagh on Sunday firmly in control of their fate in this year’s league. If they win, they advance to the final, probably to face Kerry. Either way it’s been a strong campaign so far with only the sizeable defeat by Dublin in Croke Park blotting the copybook.

Of course Tyrone retain an outside chance themselves of advancing and so there are no guarantees at the weekend, but manager Kevin Walsh will be pleased Galway have progressed so smoothly given injuries and the involvement of Corofin in the club All-Ireland.

Yet even that has caused less friction than usual and Ian Burke was allowed to play in the opening league match against Cavan.

The performance of Corofin in winning back-to-back All-Irelands has given a lift to football in the county, even if it highlighted the contrast between their forward-driven flamboyance and the defensive caution of the Galway team in recent years.

It remains to be seen if Walsh decides to loosen the restraints a bit with a full panel but he has been resistant to such impulses throughout his five years in charge.

Given the scale of injuries and club-related absences – An Spidéal were in the intermediate All-Ireland while Corofin were competing at senior – Galway began the league short at least a dozen players. That included key forward Damien Comer, who hasn’t played at all in the campaign to date. So the manager must be pleased to have moved within striking distance of another final and well away from relegation.

Anxiety about the latter made Burke’s availability for the first match all the more welcome, as there was concern that with Dublin in Croke Park in their second match, a bad start could look very bad after just two rounds.

In the event Cavan were beaten by just two points in a home match and sure enough, an 11-point beating in Croke Park followed but the league took off from there. With just one more defeat, a narrow loss against Kerry, Galway recorded a number of good results, particularly away from home.

Beating Monaghan in Inniskeen was hard earned whereas victory in Castlebar preserved the remarkable record against Mayo, who haven’t beaten their neighbours in four years of league, championship and FBD fixtures.

Walsh called a few weeks ago for Dublin to be moved out of Croke Park for All-Ireland semi-finals and so he must be all the more motivated to reach the league final given that the now deposed holders won’t be waiting for them for what would be a fourth time at the venue in a year – Galway having lost them all by an average of eight points.

Should they end up in the final the opposition will either be Kerry, whom they beat in last year’s championship encounter at Croke Park, or Mayo.

The upside of missing so many players is that others get an opportunity. For example corner forward Antaine Ó Laoi – An Spidéal player whose clever and creative play has combined with decent scoring – got 0-4 from play against Roscommon last weekend.

There have been others, such as Michael Daly’s brother John and Ó Laoi’s brother, Finian.

Combine that with the return of the Corofin players, which this year will include Liam Silke, who spent last summer in the US, and the impressive form in the club campaign of Kieran Molloy and former under-21 stand-out Cillian McDaid, back from a year in the AFL with Carlton, and it can be seen that Galway’s hand has been greatly strengthened for this year’s championship.

That’s for the summer, though, and the spring isn’t done yet.