The Kevins club opposing the development on a number of grounds 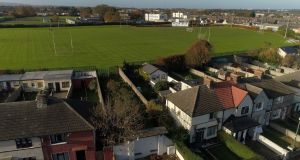 The playing fields, on the edge of the most densely populated area in the country, are currently shared by a tenancy agreement with the Kevins hurling and camogie club, along with several local schools and members of the broader community in Dublin 6, 8 and 12 – the enclosed site measuring some 5.53 hectares.

In March of last year, the GAA approved the sale of a 15 per cent section of that site as part of a plan to develop the existing facilities and help furnish a debt which it assumed from Templeogue Synge Street, although the Kevins club have been campaigning over the past year for a change of heart.

Last month a planning application was submitted to Dublin City Council for the development of a new two-storey clubhouse, all-weather training pitch, floodlights and increased car parking spaces, along with a separate residential development of 161 dwellings (153 apartments, seven townhouses, one detached house) and 108 associated car parking spaces. The apartments will be built across three buildings, each six stories in height.

According to Templeogue Synge Street, the sale and development of this 15 percent section of Dolphin Park is necessary to fund the planned upgrade of the playing and dressing-room facilities, which in turn will benefit the wider sporting communities of Dublin 6, 8 and 12.

In a statement outlining the planning upgrade, club chairman Alan O’Brien said the improvements would allow for a greater capacity in terms of pitches, training hours and playing hours (estimated to increase by 400 hours per year).

“We want to create a modern GAA facility that will service the needs of the GAA community in this part of Dublin for generations to come,” said O’Brien. “The growth in our playing numbers is down to the dedication and passion of our volunteers and the pride we have instilled in this club. However, we need to take our club to the next level in order to achieve our real potential and that means having modern facilities.

“Importantly we will be retaining two full-sized adult pitches as part of this proposal, so it will greatly enhance the playing time available for all pitch users. We will be raising our own finances and not relying on taxpayers to fund this facility. If granted planning permission, this would hopefully become one of the best GAA grounds in the area and secure our club’s future at Dolphin Park.”

It will be first upgrade to the dressing-room facilities since the 1970s, Templeogue merging with Synge Street in 1999 and now fielding 48 football teams, men and women, boys and girls.

For the Kevins club, however, there are fears the planned upgrade will further reduce the green space and playing area in what is the most urbanised and paved area in the city (with only 6.4 per cent public green cover), and in turn will negatively impact on an already deprived area of the city.

Dublin 8, with some 50,000 residents, has the lowest ratio of green space to population (4m2 per person, including the Luas line green grass verge).

Founded in 1902 and the oldest continuous hurling club in Dublin, Kevins has never had a green space of its own and is entirely dependent on the sharing of Dolphin Park; currently fielding 26 teams in hurling and camogie, the club services eight inner city parishes, running from Meath Street in the Liberties to Dolphin’s Barn north on the canal, an area which also includes 11 schools, 10 of which have no green playing space whatsoever.

Club chairman Vincent Hennessey has outlined these concerns in the Love Dolphin Park campaign: “The proposed development of 161 apartments by Belgrove Homes, and the redevelopment of the parking and the clubhouse will result in 28 per cent of Dolphin Park being put under concrete or tarmac,” he said.

“Fifteen per cent for 161 dwellings and 13 per cent for the clubhouse and parking. This is area equivalent to the pitch at Croke Park.”

The Kevins club are opposing the development on a number of other grounds, including the high density/high rise nature of the development, the further traffic congestion, and the fact the Light Bellied Brent Geese, a protected species under wildlife legislation, use the Dolphin Park as their winter feeding ground.

“We are not against the upgrade of playing facilities in Dolphin Park. Kevins hurling and camogie club is willing to assist with significant financial investment to assist in upgrading these facilities, whilst preserving these sporting lands.

“We believe this is a better way to achieve a modern sports facility for the local community, without restricting that community’s access to green space, and adversely impacting the locality and environment.”

A public meeting on the issue will be held this evening (Wednesday, March 20th) at 8pm in Griffith College Auditorium on South Circular Road, Dublin. The deadline for planning observations is Wednesday April 3rd, 2019; no submissions will be accepted after that date.