Who needs Pythagoras when you have Marty Morrissey to explain advanced mark? 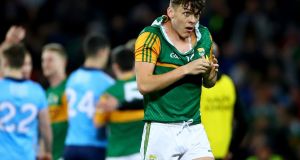 Saturday evening and Ciarán Whelan, stationed at the edge of the Croke Park pitch, was reminiscing on RTÉ about the days when the National League was little more than a weight-loss programme for the Championship, when “fellas were coming out of the Christmas period with a bit of junk in the trunk”.

Tomás Ó Sé grinned somewhat sheepishly, suggesting he oft entered the competition with some junk in his trunk too, although Bríd Stack, having won as many National League titles as All-Irelands (just the 11) had no clue what they were talking about. In her day, there was no room in Cork’s trunk for junk – it was too full of trophies.

Come full-time, though, all conceded that these are changed times, the quality of the Dublin v Kerry tussle they had just witnessed – we’re talking mighty here – signalling that both counties saw the start of the League as a bit more than a pound-shedding exercise, rather an encounter they seemed rather eager to win.

Cripes, there was even a shemozzle at the end of it which resulted in David Clifford wearing a shredded off-the-shoulder number. Although the seriousness of said shemozzle was somewhat tempered by the mass outbreak of man-hugs and handshakes that speedily followed it.

While Ciarán Kilkenny was named man of the match by the RTÉ panel – for forgetting this was only a League match and playing those last 15 minutes or so like Sam was the prize at the end of it – the gong should actually have gone to Marty Morrissey for his efforts to explain the advanced mark to us.

Halfway through Marty’s tutorial (“. . . upon the mark being awarded, the player will have 15 seconds to take the kick and opposing players now must retreat 13 metres . . .”) Oisín McConville sounded like a man who’d lost the will to live (“. . . if the mark is for the attacking team inside the 13-metre line, the ball is brought to the 13-metre line in line where the mark was taken . . .”), perhaps sensing (“. . . a defender may also claim an attacking mark once the ball has travelled at least 20 metres and has been kicked from outside or on the 45-metre line in play . . .”) that not even Pythagoras could work this one out.

As it proved, though, the new rules turned out to be a bigger issue up in Ballybofey, especially that moment when Michael Murphy called for an advanced mark, requiring Mayo to clear the scene like the fella was a coronavirus carrier, leaving him with a tap-over. You kinda concluded this isn’t working well.

Mind you, that match was on pay-telly so we don’t know how many were able to see it. “I wasn’t conscious of the fact that you guys have 600,000 subscribers who get the games free through the mobile phone,” said Joe Brolly in his pre-game chat with Eir Sport, sounding for all the world like a man with a PR release in his paws.

The chat was kind of the GAA punditry equivalent of Diana’s Panorama heart-to-heart with Martin Bashir: lots of sombre, tilty-headed talk of betrayal and hurt, RTÉ being the royal family, Declan McBennett the nation’s Prince Charles, Joe our King of Hearts.

“I hate to say no to things,” he said of Eir Sport’s offer, so he snapped it up, having said he’d never, ever go down the pay-telly route, him being morally opposed to True Gaels having to pay to watch their True Gael sport. Not that True Gaels short of money and without Eir broadband or mobile phones would have heard any of this, Joe being shuttered behind pay-telly.

For those True Gaels who missed his contribution, the gist was that his fellow Eir pundit Rory Kavanagh declared, “The king is back!”

“I don’t know about that,” Joe beamed, doing his tilty-headed humble thing.

Joe might have gone in to the League with some pay-telly junk in his trunk, but sure look, no more than the advanced mark, it is what it is.

He’s like the candidate who calls at your door promising to fix health, housing and homelessness. Just laugh at the cynicism, otherwise you’ll go doolally.