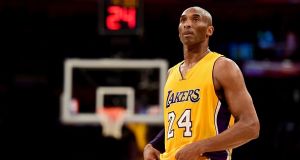 Kobe Bryant in action for the Los Angeles Lakers during his final season in 2016. Photograph: Getty Images

Kobe Bryant, one of the greatest basketball players of all time, has died in a helicopter crash. He was 41.

Bryant was on board the helicopter along with eight others when it crashed at 10am local time near Calabasas, 30 miles north-west of downtown Los Angeles, in foggy weather. The crash ignited brushfires, making it hard for rescue crews to get close to the site. There were no reported survivors, and his 13-year-old daughter, Gianna, is also believed to have died in the crash. Bryant had lived in the area for most of his life and often used helicopters to beat Los Angeles’s heavy traffic.

“We received a call just before 10am this morning of an aircraft down in the Malibu area, right off of Las Vergenes, essentially Calabasas,” Tony Imbrenda of the Los Angeles county fire department, told reporters at the scene. “Some folks were out here mountain biking this morning, they saw an aircraft in distress, they went down into the hillside. This was a helicopter, it’s been confirmed it was an S-76 Sikorsky helicopter and unfortunately there were no survivors.”

The Federal Aviation Administration and National Transportation Safety Board said they will investigate the accident.

Bryant’s talent was obvious from an early age, and he was already attracting national attention while still in high school. Unlike most NBA players, he went straight from school to the NBA, foregoing a college career. He played his entire, 20-year career with the Los Angeles Lakers, where he won five championships with the team and was named an All-Star on 18 occasions. He retired in 2016 as the NBA’s third-highest all-time scorer. He also won gold medals with Team USA at the 2008 and 2012 Olympics.

He moved into the media following his retirement and in 2018 he won an Oscar for best animated short for a film called Dear Basketball, based on a poem he wrote about his retirement from the game.

It is with great sadness that we learn of the death of Kobe Bryant and four others in a helicopter crash in Calabasas. The aircraft went down in a remote field off Las Virgenes around 10:00 this morning. Nobody on the ground was hurt. The FAA and NTSB are investigating.

However, Bryant’s reputation was tarnished after he was arrested in 2003 over accusations he had raped a teenager at a hotel in Colorado. Bryant denied the allegations, saying the encounter had been consensual. The case was dropped after the alleged victim refused to testify at trial. Bryant later apologised to the woman, saying “I recognise now that she did not and does not view this incident the same way I did”. Bryant and the woman later settled a separate civil suit out of court.

On Saturday night another NBA legend, LeBron James, had paid tribute to Bryant after passing him to become the third-highest scorer in the league’s history.

“He is someone that I used as inspiration. It was like, wow. Seeing a kid, 17 years old, come into the NBA and trying to make an impact on a franchise, I used it as motivation,” said James. “He helped me before he even knew of me because of what he was able to do. So, just to be able to, at this point of my career, to share the same [LAKERS]jersey that he wore, be with this historical franchise and just represent the purple and gold, it’s very humbling.”

Dwyane Wade, who played alongside Bryant on Team USA’s gold medal winning squad at the 2008 Olympics, was one of the first basketball stars to react to the news on Sunday. “Nooooooooooo God please No!” he wrote on Twitter.

Joel Embiid, one of the best young players in the game, paid tribute to Bryant’s influence on his career. “Man I don’t even know where to start. I started playing ball because of KOBE after watching the 2010 finals,” wrote Embiid, who was initially a volleyball player when he was growing up in Cameroon. “I had never watched ball before that and that finals was the turning point of my life. I WANTED TO BE LIKE KOBE. I’m so FREAKING SAD right now!!!!”

The NBA Hall of Famer Larry Bird also paid tribute to Bryant. “Kobe was not only an icon in the sports arena, he was a man of the world and touched so many lives and communities in the most positive ways,” he said. “His star was continuing to rise every day and he knew no limits because of his many intellectual and creative talents and desire to give back to others – his passion for the game, for his family and for others was apparent in everything he accomplished.”

Figures outside of basketball also reacted to the news on Sunday. “As I tweet through my tears, I am so hurt,” wrote civil rights activist Jesse Jackson. “I cannot stop crying. Kobe was instrumental to so many people. There is a hole in the basketball world and there will be for a long time. Rest in heavenly peace.”

Players and fans observed a minute’s silence at the first scheduled NBA game on Sunday, an encounter between the Denver Nuggets and the Houston Rockets. Bryant’s name was chanted at the NFL’s annual Pro Bowl game, which took place in Orlando on Sunday as news of his death broke.

The Lakers’ next game is on Tuesday at their home arena, the Staples Center, against local rivals the Los Angeles Clippers.

Bryant was married to Vanessa, with whom he had four daughters, including Gianna. His father, Joe, also played in the NBA.