Kobe Bryant - a global icon for NBA and sport 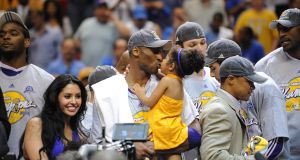 In 2009 Kobe Bryant of the Los Angeles Lakers celebrates victory with his family following game five of the NBA Finals. Photograph: Getty Images

Kobe Bryant, a global icon for the National Basketball Association, died in a California helicopter crash Sunday, according to news reports. He was 41.

Profile of a sporting legend

After high school, Bryant was the 13th overall pick of the 1996 draft, selected by Charlotte, which traded his rights to the Los Angeles Lakers in exchange for centre Vlade Divac.

He spent the next 20 seasons in Los Angeles before retiring following 2015-16 season. Bryant won five NBA championships for the Lakers and amassed a number of accolades. He was the NBA’s Most Valuable Player in 2007-08, a 15-time All-NBA selection, 18-time All-Star and 12-time All-Defensive team member.

He twice was named the MVP of the NBA Finals and was the All-Star Game MVP four times.

Bryant played in 1,346 career games and retired as the third-leading scorer in NBA history with 33,643 points. His father, Joe, also played in the NBA.

James had told NBA.com after the game: “I’m just happy to be in any conversation with Kobe Bryant, one of the all-time greats to ever play.” Bryant tweeted on Saturday night: “Continuing to move the game forward KingJames. Much respect my brother”. That was the final tweet on Bryant’s personal account.

He won Olympic gold medals for the United States in 2008 and 2012 and is among the candidates this year for induction into the Naismith Baskeball Hall of Fame.

The Lakers retired both of Bryant’s shirt numbers — eight and 24 — in a ceremony in December 2017, when then franchise president Magic Johnson said: “We’re here to celebrate the greatest who has ever worn the purple and gold”.

In 2018 he won an Oscar for best animated short for a film called Dear Basketball, based on a poem he wrote about his retirement from the game.

Bryant and his wife, Vanessa, have four daughters: Gianna, Natalia, Bianca and Capri, who was born in June 2019.