They've money to dry their tears, but they also have a platform. Some are not afraid to speak 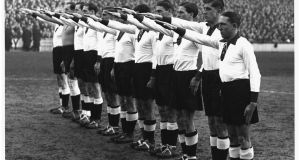 They always tell you that sport and politics don’t mix. It’s obvious. When people attend sporting events they don’t want to hear about Donald Trump, gender equality, police brutality, secessionists, recession or whatever the hot topic is at the moment. We have had it every day on the news, and now you want to ruin my escape method by adding more political stuff. No way José!

I remember the first protest that I read, and I was inspired by Peter O’ Connor and Con Leahy. I think everyone knows the story, but in case you don’t: O’ Connor and Leahy were selected by the Irish Amateur Athletics Association and the GAA to represent Ireland in Athens in 1906. Alas times were different. You needed a national Olympic committee to select you, and since Ireland was still under the British empire, three men, John Daly, O’ Connor and Leahy, were all chosen to represent team GB.

Leahy and O’ Connor were involved in a protest that was so insane if you wrote the script and asked Stephen Spielberg and Tom Cruise to hop on board, they would have thought you were mental.

O’Connor came second in the long jump, and after a near brawl with the sole judge (who happened to be team USA’s head coach), he climbed up a 20ft flagpole in the stadium. On top of the pole he hoisted a large green flag featuring a golden harp and the words Érin Go Bragh, while teammate Leahy fended off Greek police.

Eyes of the world

I’m sure we can all remember how Hitler turned the eyes of the world on Nazi Germany during the 1936 Olympics. US Olympic committee president Avery Brundage became a leading supporter of the games being held in Germany, arguing that “politics has no place in sport”. Avery was so obsessed with not embarrassing Hitler he pulled two Jewish sprinters, Sam Stoller and Marty Glickman, from the 4 x 100m relay. And, yes, they were the only two Jewish people on team USA.

And who can forget the 1968 Olympics in Mexico when team USA’s Tommie Smith raised his fist to protest against the treatment of African Americans. Smith’s raised fist is so immortalised it is in the Olympic museum as one of its greatest sporting moments.

So now the International Olympic Committee (IOC) wants everyone to know it is not in the politics game. Maybe it was inspired by the dismal look of the World Athletics Championship which took place in Qatar. Or perhaps it has looked at how every sport has become so unnecessarily politicised.

The IOC will have you at the Olympics in Tokyo if you don’t raise your fist or take your political views to the podium or the village – to keep your views outside your front door.

The same committee that less than two years ago managed to unite North Korea and South Korea in Pyeongchang for more than five minutes. The IOC president, Thomas Bach, reminded us this was “one further step showing how sport can once more make a contribution to peace on the Korean Peninsula and the world”.

Even more ironic this is the same organisation and president that tweeted a few days ago “this is the Olympic spirit” with a cute picture of Bach with Iranian and US athletes at the ski mountaineering sprint in Lausanne, Switzerland, at the Youth Winter Olympics.

Firstly, sports is a microcosm of society that we live in. Some political elements, whether we like them or not, do seep in. And as in 1908 and 1936, the society that we lived in was full of oppression, unnecessary injustice and had the idea that sports could unite rather than be used to embarrass the powers that be. Someone was bound to stand up and do something.

Secondly, athletes, like all of us, live in this world, and suffer the exact same oppression, racism and sexism like everyone else. Yes, they have the money and power to dry those tears, but they also have a platform/podium, and some are not afraid to speak up about the injustices they see.

The Johan Cruyff Institute has an article on one of its football pages. The headline reads “The argument that sport and politics shouldn’t mix is the perfect recipe for corruption.”

Maybe Bach and Co need a history lesson to learn for the future.

1 Keeping Donegal on the road to success a costly business
2 Six Nations: Ireland v England all you need to know guide
3 TV View: Roy Keane but Daragh’s keener as Late Late fails to shoot the lights out
4 Ireland Slam England at the Gardens to open up Grand ambitions
5 Matt Williams: Ireland will need to step up on Wales display to prevail at Twickers
Real news has value SUBSCRIBE