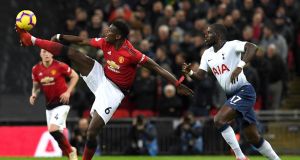 It was football’s equivalent of the moon landing. Millions gathered around their tellies in their living rooms, jaws gaping, wide-eyed with wonder, feeling all spine-tingly because they knew they were witnessing history. In decades to come they’ll be sitting their grandchildren on their knees and telling them about the day they heard Graeme Souness praise Paul Pogba.

All that was missing, really, was a voice-over from Walter Cronkite, although Robbie Keane’s slight gasp on hearing Graeme complimenting the French lad at half-time made for a decent enough substitute.

David Jones told Souness he was trending, somewhat provocatively adding that he doubted he would know what that actually meant. Ageist. Although Graeme’s blank expression seemed to confirm that he wouldn’t, indeed, know Twitter from an apple fritter.

Before the game it had been a case of “as you were”, Graeme telling us that Pogba “isn’t a playmaker” and that “he’s no Pirlo”, although there was no mention of hairdos this time around.

But then Pogba made a play with a pass that would have had Pirlo purring, Marcus Rashford tucking it away, and all changed utterly.

“Exquisite,” Graeme conceded, and you could almost feel his pain – akin, perhaps, to that felt by anyone who ever entered a 50-50 tackle with him. You could actually even see a muscle twitch in his face, that’s how unnerving a moment it was for him.

Granted, the ceasefire proved brief enough, Graeme clearly a bit vexed by Jamie Redknapp’s interview with Pogba after the game during which the most searching question put to the French man was along the lines of “are you the Second Coming?”

At that point we returned to factory settings. “He thinks he’s Pirlo,” said Graeme, “he just wants to play Hollywood balls”, overlooking the fact that a Hollywood ball had created the match winner. And anyway, what’s wrong with Hollywood balls, apart from the fact that they result in the loss of possession 94.23 per cent of the time? If football was only Jordan Henderson looking for an unmarked player behind him to pass to, we’d be watching A Place in the Sun repeats instead.

Graeme had another issue with Pogba. He should have been sent off, he insisted, in reference to the moment Dele Alli’s upper leg crashed, quite violently, in to Pogba’s studs. Jamie gave the United man the benefit of the doubt, reckoning he was just trying to shield the ball. Robbie, not unreasonably, pointed out that there was so wide a gap between said studs and said ball, Jamie was, in so many words, talking poppycock.

Much of the rest of the chat focused on David de Gea’s performance. The Spaniard’s feet are on an open-top bus parade through Manchester as we speak. Best of all, he channelled his inner Ossie Ardiles in his post-match interview with Sky’s Patrick Davison when he spoke of “Tott-een-ham”, while Tott-een-ham gaffer Mauricio Pochettino managed to keep a straight face when Patrick asked him: “If you’d taken your chances today would you have got at least a draw?” Somehow Mauricio resisted replying: “If we’d taken our chances, we’d have won 14-1.”

But had United’s break last week in Dubai given them an advantage over a weary Spurs, David wondered? No, said Graeme, partly because when you’re away from home you’re not sleeping on your usual pillow, he said, Robbie nodding like a man who has lain his head on far too many five-star concrete blocks.

Ole Gunnar Solskjaer was up next, his neck still throbbing from lying on his Dubai pillow, the baby-faced one coming close to assassinating Patrick when he mentioned that “putting smiles on players’ faces” thing. Like his six-game winning streak has been entirely down to telling the lads Roy Chubby Brown jokes and giving them hugs.

Patrick wondered if getting the better of Pochettino had increased Ole’s chances of being made permanent United manager. “I’m not here to talk about myself,” he replied. If Jose was watching, he would have suffered a third-degree burn.

Early days. It might well yet all turn into the shape of a pear, but for now, at a time when skies are grey, Ole is injecting no little happiness into the post-Jose lives of the United faithful. One small step. Actually, strike that: a giant leap.