Competing championships give viewers opportunity to gorge on treble 20s 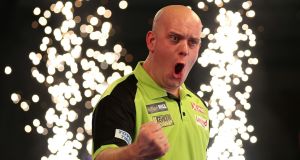 Paul “Crocodile Dundee” Hogan was chatting to Georgie Bingham on Eurosport right after he had slain Wesley “The Warrior” Newton in the opening round of the BDO World Darts Championships at the Lakeside in Frimley Green on Saturday evening, one of his highly euphoric supporters holding up a sign behind him that read: “The Show Must Hogan!”

Perhaps never in the history of sport has there been a bigger scanning/rhyming failure, unless Crocodile goes with Ho Gone, but that’s probably as likely as the man who scored Newport County’s FA Cup winner against Leicester, Pádraig Amond, going with Pad Rage. (In fairness to the BBC’s Guy Mowbray, he made a commendable effort in the pronunciation department, dubbing our Carlow man “Pour-rig” – golf commentators take note).

Anyway, it’s been about a quarter of a century now since the big split in darts that resulted in two world championships, but those of us who binge-watch both tournaments between mid-December and mid-January, much like they were a Netflix murdering series, without paying a great deal of attention to the sport for the rest of the year, are still inclined to ask annually: ‘What’s the difference between the two?’

Darts aficionados would most likely tell you that the PDC tournament at the Ally Pally is the equivalent of the Champions League, while the BDO is the Carabao Cup, the difference in prize money somewhat telling: Michael Van Gerwen won £500,000 on New Year’s Day for collecting the PDC title (and was very emotional about receiving a congratulatory phone call from the Dutch prime minister: “He said that he was glad I did it for Holland and blah, blah, blah”), whoever prevails at the Lakeside will have to settle for just the £100,000.

And, to be honest, the quality of some of the BDO darts on Saturday was much like you might see in your local from a fella who’d just downed 14 snakebites, his arrows more likely to land in the backside of someone popping out to the loo than in the treble 20.

Most obvious, though, is the contrast in quality between the signs in the crowd and the choice of entrance tunes.

At the Ally Pally last month, for example, we saw “Last Christmas I Gave You My Dart”, “I Thought I Was Going Ice Skating” and “Bristol Rovers Are Shit”, all of which were worth the £400,000 extra alone, while there was a tired-ish feel to the Frimley Green tunes – eg Wesley Harms chose Bon Jovi’s It’s My Life and Sharon “Racing Angel” Prins opted for Born To Be Wild – compared with, say, finalist Michael Smith’s choice of Shut Up and Dance and Daryl Gurney alternating between Sweet Caroline and Sex on Fire.

BDO veteran Tony “Silverback” O’Shea – he’s 57, which is 112 in darts years (as Eurosport’s resident ageist John Rawling reminded us, “it’s a young man’s game”) – tried to perk things up a little by arriving to the strains of Hey Baby (Uh, ah) (club remix)’, which sent the crowd wild, including the group of lads dressed up as nuns, but it didn’t feel right, almost like Conor McGregor entering the cage while Barbie Girl blasted through the speakers.

Silverback was up against Wesley “Sparky” Harms (indeed, he’s a former electrician) who made news last year for his involvement in “Fartgate”, when Gary Anderson accused him of emitting a serious amount of wind during their grand slam of Darts meeting (“Every time I walked past him there was a waft of rotten eggs”). Happily, nothing nasty was left lingering in the air this time around, Sparky short-circuiting Silverback to advance in the tournament.

Impressed as he was by Sparky, our commentator Paul Nicholson tipped Germany’s Michael Unterbuchner to be the surprise package of the championships. “He’s being touted as a bête noire, a bit of a dark horse!” Keep an eye on the black beast as the show, well, Hogs-an.