TV View: Shane’s strange dream was not the only hallucinatory aspect of UAE success 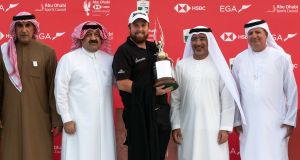 “Come on, Offaly!” This wasn’t O’Connor Park in Tullamore, it was Abu Dhabi Golf Club.

The cries from the crowd left Wayne Riley a little mystified, but Paul McGinley explained that a heap of Irish are living and working in the United Arab Emirates, so that accounted for this being like a home Leinster Championship game for Shane Lowry.

And when the man from Clara only went and won himself the tournament, Wayne had a hunch. “I think the Irish will jiggle here in Abu Dhabi tonight,” he suggested. Shane grinned a grin that hinted on him planning on doing some jiggling himself.

Those happiness levels were, of course, augmented by the fact that, with just seven holes to play, he had fallen four shots behind Richard Sterne, Ewen Murray’s sombre commentary all but laying Shane’s tournament-winning hopes to rest.

In the end you’d have nearly been beaming as broadly as the fella himself, not least because he’d had a tossy-turny night before his final round, telling Wayne he’d had a hallucinogenic-ish dream about his daughter Iris (age one and 10-twelfths) “running around Augusta in her little suit caddying for me in the par three, in the middle of the night”. Wayne didn’t know what to say. “That’s how mental this game is,” said Shane. Well, yeah.

But it was a very welcome buoyant footnote to a week that had started by leaving us in shreds after Andy Murray’s exit from the Australian Open.

All the chat on Eurosport ahead of his game against Roberto Bautista had been about the state of his dodgy hip and the likely need for an operation on it soon. Frew McMillan somewhat needlessly shared with us that the only op he’s had of late, despite a career that left several of his joints in less than tip-top shape, was a vasectomy.

Upon observing Andy’s physical condition during the Bautista match, and on noting the presence of “the cross of St Andrew” in the crowd, Frew concluded that Murray required more than a snip – “what he needs right now is the Red Cross”.

But if Andy was in pain come the conclusion of his five-set defeat, it was nothing compared with the agony he was about to endure during his post-match chat with Mark Petchey.

“Andy,” said Mark, “no matter what the scoreboard says tonight, you won.” This, of course, wasn’t true, and Andy’s face confirmed as much, but because Mark used to be his coach, he was too polite to say.

“If this was goodbye it was the best goodbye you could have given any of us. It reminded us of everything that you are … you have the heart of Australia … eh, the size of Australia. We’re going to miss you [voice now quivering], but I’m sure you’re going to miss this more.”

And then Andy had to watch a tribute video, accompanied by a funereal soundtrack, that repeatedly referred to his career in the past tense, and all the while we got to watch his reaction in a box in the bottom-right corner, giving it a bit of a Gogglebox feel.

“It’s very sad that you have to take that [retirement] decision,” said Rafa Nadal, “but sometimes life is not perfect, no?”

“I’m really going to miss you on Tour,” said Caroline Wozniacki, “as a player and as a person.”

“Thank you for the memories,” said Mark at the end, and all you really, really wanted was for Andy to say:

“One hopes the tributes are premature,” said Frew, who noted that Andy hadn’t actually ruled out his hip being fixed by an op and returning to win another grand slam or two.

Unlikely, perhaps, but Mark will think he’s seen a ghost if he has to have a post-match chat with a triumphant Andy in 12 or 24 months’ time. He would, no doubt, spend the night jiggling in Melbourne.

Davy Russell ponders what might have been for Tiger Roll 17:18
Cycling Ireland thrilled with take-up for Zwift League series 17:02
Racetrack organisation does not envisage any closures in the short-term 15:03
Coronavirus crisis could cost the GAA up to €60 million 14:19
Eddie Hearn: Tyson Fury is Anthony Joshua’s opponent of choice 12:55
Here is your handy guide to sport on television this week