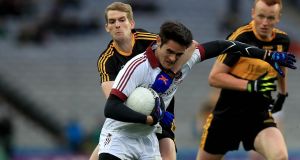 Derry’s Chrissy McKaigue has claimed that the success of Dublin, and their attacking philosophy, is partly why disillusioned Gaelic football fans are falling back in love with football again.

McKaigue, a dual player with Slaughtneil and Derry, bemoaned the spread of “ultra-defensive football” throughout the game over the last decade.

The former Australian Rules player claimed that management and players became more interested during that period in “GPS stats and who could wear the tightest shirts” as defensive structures and physical power dominated.

Yet with Dublin bossing the Leinster and All-Ireland scenes in recent seasons, with an emphasis on scoring their opponents into submission, McKaigue reckons the game is on the verge of revolution.

Monaghan and Ireland talisman Conor McManus made similar comments last month when he acknowledged that his own county would have to commit more to attack if they hoped to beat Dublin.

Both Monaghan and Tyrone were heavily defeated by Dublin in this year’s Championship despite defending in numbers and attempting to stifle Jim Gavin’s side.

McKaigue, one of the top half-backs in the game, suggested that the penny is finally dropping generally that if teams are serious about taking down Dublin they will have to be brave and commit more men to attack.

“I think Dublin have shown it, this ultra-defensive football has gone with the dodo bird,” said McKaigue. “It [defensive football] allows you to be competitive for a certain amount of time, but it’s very difficult to actually win anything with it. You need a balance.

“I think the attacking side of the game has become more prevalent. If you look at the All-Ireland final this year, Mayo played a very open game of football. I think that club football gets a fair bit of publicity and attention, and in many ways it’s been the saving grace of Gaelic football over the last couple of years because people have been pretty slow on the intercounty game because it has been pretty negative.”

It remains to be seen exactly how attack-minded Monaghan actually are in 2018, and if Mickey Harte rips up the script in Tyrone after listening to McKaigue’s argument.

“I think it’s proven now that if you want to win big honours in Gaelic football, club or county, you’re not going to do it if you’re ultra-defensive,” continued McKaigue. “It’s just not going to happen. There has to be a balance to your play. I think there’s more emphasis now on the skills of the game, whereas for a couple of years there I did feel it went a bit OTT and was all about GPS stats and who could wear the tightest shirts.

“I think we’re starting to appreciate now the beauty of Gaelic football again. I don’t want to go back to traditional catch-and-kick either, you have to play the game smartly. Balance is the key word. When you look at the minute, Dublin and Mayo are the two best teams in the country and their balance is fantastic.”

McKaigue’s Slaughtneil showed their attacking edge recently when overcoming Kilcar of Donegal in the AIB Ulster club championship, a high-quality encounter that showcased all the skills of the game.

The 2-17 to 0-17 win secured Slaughtneil’s place in Sunday’s provincial final alongside Cavan Gaels.

The south Derry club at the foothills of the Sperrin Mountains are ultimately chasing All-Ireland success after losing finals in 2015 and 2017, though McKaigue argued that not all success is measured by silverware.

“Maybe people outside of Ulster, outside of Derry, don’t truly appreciate how competitive Derry club football is,” said McKaigue. “For us to come out of Derry four years in a row, we’re only the second team in Derry ever to do that. The other team was the great Bellaghy team of the 1960s.

“We’ve gone on to reach three Ulster finals in four years, which is a unique achievement in itself. It’s very easy to get caught up with, ‘we haven’t won that All-Ireland yet’.

“We have to be extremely aware that up until 2004 we had never won a county championship. Sometimes perspective is the most important thing to keep.”

Still, McKaigue acknowledged that the team continues to be driven by the pain of defeat to Dr Crokes in last March’s All-Ireland decider.

“There’s no point in sitting here and spoofing you and saying, ‘that didn’t hurt’,” he said. “It was crippling, absolutely crippling. It was the ifs, the could haves and all the rest of it.”