Blanket defence ‘may be saving players from concussion’ 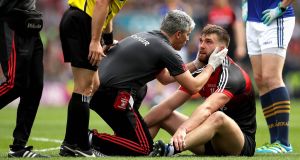 It may divide opinions in the football world but according to one of the GAA’s foremost medical experts, the blanket defence may be helping to keep down the incidence of concussion.

After a fairly hectic week as Ireland’s international rules medical officer in Australia, dealing with a rampant stomach bug in the panel, consultant Kevin Moran is happy to talk about one of the big problems in contact sports.

The GAA’s representative at major international conferences on the subject of concussion, he is also a member of Croke Park’s Medical, Scientific and Welfare Committee as well as the Donegal team doctor and is with Joe Kernan’s Ireland team in the same capacity. Choosing his words carefully, he says that the issue has yet to present to the same extent as in other sports.

“At the moment and we’re taking everything on board very carefully, we don’t have evidence that there are really significant problems in the GAA but maybe in the next two years things will begin to show up.

“One of the things that might have protected us in the last number of years is the blanket defence because the impacts even though they could be significant weren’t high-velocity. Fellas just didn’t get the room to build up momentum.”

GAA policy is based on the 2015 guidelines, among which is the removal of any player suspected of having sustained concussion, rather than ain-match Head Injury Assessment, a point made by former Offaly hurler Brendan Murphy, who is currently the Tipperary hurlers’ team doctor at the launch of this year’s concussion symposium, one of the initiatives in which Moran is involved.

An injury that evolves

“I agree 100 per cent,” he says, “and the other side of that is that concussion is an injury that evolves. You may seem perfectly well right now but in another 24 hours you may get much worse.

Whereas high-profile inter-county matches have the full range of medical back-up and television cameras – to enable video review of incidents – Moran accepts the vast majority of activities are not monitored at anywhere near that level.

“Doctors would like to see the impact back again because seeing it is very important.

“To be absolutely accurate – and a rugby league representative demonstrated this very well at a meeting in Croke Park – they used Hawk-Eye with 17 different views to witness an impact. Seventeen! They’re probably looking at it from a different perspective – looking to see if a player can put them back on whereas we’d be looking at it from a player welfare perspective.”

“We’ve 95 per cent of games where there’s no medical or trained professional. Therefore our main thrust has to be education, making everyone aware.

“The GAA have gone to extensive efforts between websites, training modules and training days for everybody from players, administrators and referees.

“There is no black-and-white, definitive way of deciding if somebody is concussed except to watch over 24 to 48 hours so our suspicion is about an injury that could potentially evolve.

“Remember, the other part of it is that if they have been concussed and get a second impact then adult players are more likely to get second-impact syndrome, which is an acute swelling of the brain from which there have been two deaths in women’s rugby in the UK in the past two years.”

He believes that recognition of the problem is far greater than in the past but proposes that more should be done to create an environment where best practice comes automatically both in preparation for – maintenance of records – and treatment of any episodes.

“I think every club should have a welfare officer and on their agenda concussion should be a priority: keeping a concussion log on any player in the club, particularly under-age because now we have players playing Gaelic today, rugby tomorrow and soccer the next day.

“That’s one of the big problems. You could have a fella who had a couple of concussions and nobody knew about them because they happened in other sports.”

In relation to the stomach bug which swept through the Ireland camp on their arrival in Melbourne, Moran says that they had been particularly careful about providing antiseptic gel, as used in hospitals to combat infection, and compression clothing to players embarking on the long-haul flights as well as instructions to drink five litres of fluid over the 24 hours.

“The effect on the body of long-distance air travel is like the effect of a dehumidifier in a room because the humidity in an aircraft runs at about 25 per cent of normal levels and the pressure at about 75 per cent. They lose about two litres of fluid, just to the air in the plane.”

In all, he says that nine players were affected by the illness, including Michael Murphy who scored 20 points in Ireland’s defeat.

“For Michael to achieve what he did was heroic,” says his doctor. “He was only flying on one wing. He went [straight] to bed the night of the match – he’s the ultimate professional.”