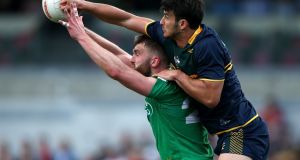 Australia’s Robbie Tarrant spoils the mark for Aidan O’Shea in the second Test of the international rules series, which ended in two defeats for Ireland. Photograph: Paul Kane/Getty Images

The irony is that, as the international series continues to bob above the surface, uncertain of staying afloat but defiantly buoyant, the game itself has never been in better shape.

For a third series, including the most recent one-Test years, Australia have fielded an excellent team and Ireland have been competitive in taking them on in contests that have shown the best of international rules.

The Australian television broadcast remarked on the relentless pace of the match, the fast-moving transitions from defence to attack and the lack of any respite.

As the match wore on, though, Ireland’s error count rose and although players were afterwards divided on whether fatigue had been an issue it’s not unreasonable to believe that the intensity of the contest may well have taken a toll on stamina and consequently decision-making in the closing stages.

Offered the platform of a seven-point lead going into the final quarter at any stage last week, Ireland would have been more than happy to take it but in those final 18 minutes they were unable to translate that into a series – or even Test – winning position.

In the end, it was a disappointment for Joe Kernan’s side – even a simple match win would have been a matter of satisfaction and players knew that they had themselves to blame for that in the mistakes made in the second half.

Australian coach Chris Scott paid tribute to the opposition afterwards and was evidently impressed with the adaptability shown between the first and second Tests.

“Even within the week, the way they adjusted their game and really had us covered for the majority of the game speaks to how highly skilled their people are. The Irish played a little bit higher in their formation. The week before they played their forwards back a little and didn’t pressure us as much . . . ”

That increased pressure got the scoreboard moving and there was deliberation and accuracy in both of the early goals – the higher press reflected in the finish provided by a centrefielder and defender, respectively. Such was the energy invested by Ireland in the first quarter that the players’ GPS statistics were, according to one of the backroom team members, “off the charts”.

It was always a danger that unless they were out of sight by the final quarter that sort of effort would begin to take its toll.

Then everything is complicated by the opposition and the AFL team were excellent. Their ability to read and claim high ball – even with its unfamiliar shape – was epitomised by their Player of the Series Nat Fyfe, who took more than half of his team’s contested marks and twice as many as the best Irish players.

He was able to complement his ball winning with accurate kicking, most spectacularly for his first-Test goal, but also for a number of overs but there was also a more evenly spread contribution from his team-mates. Ten players of the home team kicked overs on Saturday, compared to half that number for Ireland.

Ireland pushed it all the way though and Kernan is entitled to feel undone by fate in the bug that flared through the camp in the first week. The disruption and loss of players meant that the campaign was on the back foot at an early stage and yet they still had chances to get even closer – an extra goal in each Test would have transformed the finale and there were chances.

Ultimately, the team was a little too inexperienced. It’s impossible to predict with any confidence how rookies will take to the international game. Past performance is the gold standard in credentials and sure enough for the fifth Test in succession Conor McManus, the vice captain, was Ireland’s top scorer, his accuracy from all sorts of angles astonishing the locals.

His Monaghan colleague Darren Hughes flew out the second week and with his experience of the game fitted in quickly and seamlessly.

Shane Walsh was the best of the new caps in attack and even he ruefully accepts that he could have done better with the goal opportunities he had on both days.

After he had done so well in trying circumstances Kernan’s criticisms of the match officials were unfortunate in that they deflected from what was by and large a fairly disciplined two Tests – Joel Selwood’s dismissal was deserved and the decision take by AFL umpire Matt Stevic on advice from video official Ian Curlewis.

It was also unfair to Fyfe to create a controversy around his late challenge on Aidan O’Shea when appropriate action had been taken and the Irish manager himself said that he had yet to sit down and review the video. In addition his remarks drowned out his very upbeat assessment of the series.

“I’m finished now and it’s been an honour to be involved in both series. I hope from both countries’ point of view that we do keep it going. It’s fantastic to wear an Irish jersey – every one of those boys are so proud and their families are so proud.

“After all the years and the problems there were I think it’s really starting to fulfil itself. Australia are putting out great teams. We always try to put out a good team and it’s two great sides going head to head . . . ”

Pumas captain Pablo Matera suspended over racist posts 09:06
Entire Newcastle squad to self-isolate amid Covid-19 outbreak 07:35
Comfortable wins for Munster and Ulster; Full panels can now attend GAA matches 07:24
Gerry Thornley: Maybe the new Ireland could do with a little of the old detail 06:00
Kevin McStay: Beautiful chaos of All-Ireland to end in a Dublin-Mayo final 07:57