Daryl Flynn on being banned for lifting Kildare SFC trophy 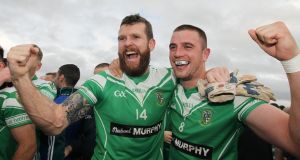 Flynn, who was earlier sent off in the battling win over Celbridge, along with vice-captain David Whyte, was informed that he was ineligible to lift the cup and that doing so would result in a one-match suspension.

A little-known GAA rule prohibits players who were dismissed in a final from participating in the trophy presentation, though Flynn said he ignored this and lifted the cup jointly with Whyte.

Midfielder Flynn, 32, who retired from inter-county duty with Kildare in 2016 after 13 years of service, was content to effectively double his red card suspension from one to two games on the basis that it may be his last-ever chance to hoist the cup.

He and Whyte served their one-match suspensions for the red cards when Moorefield beat Portlaoise in the AIB Leinster club quarter-finals without them.

The duo are eligible to return for Sunday’s semi-final against Rathnew as the separate one-match ban for lifting the cup doesn’t kick in until the opening game of next year’s county SFC.

“Look, if I could make the decision again, I’d lift the cup again,” said Flynn. “You mightn’t get that chance again in your life. Going up, someone said it, but I said, ‘look, I might never get this chance again.’

“You had a choice, it was strange. I don’t know what you’d do if you were playing for your club and you had a chance to lift the cup. I would put that question to anyone. I made the decision that I wanted to lift the cup.

“David was vice-captain. It was always the case that if we won I was going to lift the cup with him because we’re captain and vice-captain. I know the two of us got sent off and people think we were kind of rubbing it in to the county board, but it was actually always the plan that if we were to lift it, we’d lift it together.

“We’ve done that over the years. It wasn’t a dig at the county board or anything.”

Flynn, who lined out at midfield for Kildare in the 2009 Leinster final and 2010 All-Ireland semi-final defeat to Down, said he’s unsure about the possibility of appealing the unlikely suspension.

Aside from having the two players sent off early in the county final against Celbridge, Moorefield also missed a penalty, yet somehow led throughout and refused to lose.

“The defensive shift that they put in, with 13 men, it’s probably unheard of for a county final,” said Flynn. “They were underdogs before the county final so I can’t imagine what the odds were after how many minutes into the game when we’d lost two players.

“We would have been big underdogs then but they pulled it out of the bag. And they showed that they have a great squad last Sunday week against Portlaoise. Without us they played very well. We’re back training and we’re trying to fight to get back into the starting team or the subs on Sunday.”

Moorefield edged a one-point game against Portlaoise and should be considerably stronger this Sunday with the return of their two key men.

They face a Rathnew side buoyed by their shock quarter-final win over St Vincent’s having previously beaten Louth side Newtown Blues.

Flynn admitted that the exit of Vincent’s and Portlaoise, the two most successful clubs in Leinster with seven provincial titles each, has blown the provincial competition wide open.

St Loman’s of Mullingar, powered on by Westmeath trio John Heslin, Paul Sharry and Shane Dempsey, are the new favourites to lift the title on December 10.

“It’s wide open, with Portlaoise gone and Rathnew beating St Vincent’s, anyone could win it,” said Flynn. “Just like this Sunday between ourselves and Rathnew, it’s 50-50, the same with St Loman’s and Simonstown. It’s good because it’s always been Rhode, Portlaoise or a Dublin team that has been winning Leinster games so this will be a different name on the cup.”