Pat Gilroy has no interest in entertaining dual players

Dublin manager will welcome players who commit to hurling, if it’s for the right reason 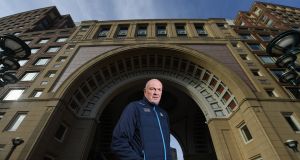 There is some gentle irony in the fact that, as a purveyor of both football and hurling, Pat Gilroy has little time for the dual player. At least not for the time being.

As Gilroy begins putting some proper shape on his Dublin hurling panel, two things have already become apparent: he’s opening the door to anyone who feels they fully commit to the cause, only for now that means deciding between hurling or football.

I’m not going to do anything that’s going to damage the footballers. There are enough hurlers in the county without having to interfere with that

“I think it would be physically possible. A lot of these fellas who are in college and that are free for the summer, so there is no reason why they couldn’t play both games. Nearly all of our panel, and a good few of the football panel, play hurling. Pretty much everyone here plays football with their club. If the GAA really wanted to have dual players it could have it, but they are making it hard with [the way] the fixtures are set out.”

Two names come to mind: Diarmuid Connolly of St Vincent’s and Con O’Callaghan of Cuala, both classified as dual players, although at county level both committed to football’s cause.

“I don’t think Diarmuid is in a position where he wants to commit to the hurling,” says Gilroy. “He’s 30-odd now. Unless you’re playing hurling a huge amount there’s no way you can think about playing inter-county.

“He was starting to get up to speed, to the kind of hurling he could play as a kid in the semi-final, but he wasn’t one of Vincent’s top players. I think that’s the way he feels about it.

“As I said before, I’m not going to do anything that’s going to damage the footballers. There are enough hurlers in the county without having to interfere with that. If a fella wants to commit to that and he’s playing with his club and he’s playing well then we’ll look at it.”

And O’Callaghan? “If a fella really wants to play for the Dublin hurling team I will take him and grab him with both hands. But he has to want to do that. I’m not going to begging anyone to play for the Dublin hurling team. I think, to be fair to the likes of Con and that, he’s going great with the football. It’s up to them. They might think at some stage in their lives, ‘I’ve enough of football, I want to give hurling a go . . .’

‘Give hurling a lash’

“He’s young enough, and good enough to do it. It will be his decision if he decides I’ll give the hurling a lash. Myself and Jim [Gavin] will have a very open dialogue about anybody because it’s the only way it will work. We’re both playing on the same team here. We won’t want to be doing damage to each other. If a fella’s head is turned to football or turned to hurling, let him go that way.”

Despite making his name as the manager who delivered Dublin’s first All-Ireland football title in 16 years, when winning in 2011, Gilroy actually confesses a stronger draw to hurling.

I don’t mind if they play football or hurling, as long as they’re doing it for the right reason

“I would have preferred to be a Dublin hurler than a Dublin footballer,” he says, “but I wasn’t good enough. At the time hurling was a game that I preferred, all the way up. But I wasn’t as good as I was at football. There were more chances with the football.

“That’s something that irritates me because even with my own kids, they probably choose football at times because they think they are going to get success, where they don’t see the chance of success with the hurling.

“I don’t mind if they play football or hurling, as long as they’re doing it for the right reason, where people are making the decision on what they are better at, rather than what they will win at. If they had the choice maybe it would be healthy.

“I would always fancy my chances at doing something in hurling from a long time ago but never really got that involved. And I had no regrets about leaving the football. I couldn’t, work-wise, continue with it at the time. I have enjoyed so much of their success since. I didn’t have a hankering to go back and do something in football. The bits that you do miss is being around 40 people that are enthusiastic, that want to be the best that they can be.”

The involvement begins for real now. Gilroy will be using DCU as Dublin’s training base, same as he did with the Dublin footballers, but no looking back either.

“We have a mountain ahead of us. The reality of it. But there are so many different things that have happened over the last three years, some beyond anybody’s control. I always believe the past is perfect because you can do nothing about it. It’s about the future, but you do need to learn the lessons from the past.”