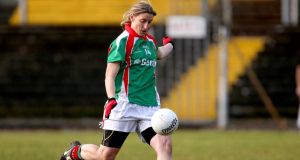 Cora Staunton scored 1-7 on Sunday for her club. Photograph: Inpho

Carnacon were driven on by their county players as Fiona McHale delivered another powerhouse performance at midfield, while Amy Dowling scored 1-3 from play. Martha Carter and Marie Corbett were solid in defence.

Half-forwards Louise Dowling and Aoife Brennan, who scored a point each, covered every blade of grass as Carnacon set up a December 3rd final clash with Cork’s Mourneabbey at Parnell Park.

It’s the first time that the clubs will have met in the senior championship - as Carnacon look to collect a first All-Ireland crown since their last win five years ago.

Club captain Staunton may be Australia-bound to prepare for a professional stint with the Greater Western Sydney Giants but the decorated forward will have to put travelling plans on hold for at least another fortnight.

For St Macartan’s, this was a bridge too far but the club managed by former Tyrone All-Ireland winner Ryan McMenamin can still reflect proudly on a landmark season.

They registered eight wides in the first half and they proved costly, as Carnacon put increased daylight between the teams as the game wore on.

At half-time, Carnacon led by 1-6 to 0-3 and the goal from McHale in the 16th minute was quite brilliant.

McHale picked up possession around midfield and drove at the heart of the St Macartan’s defence, with team-mates making intelligent runs on either side to clear a path.

McHale’s finish was low and decisive and the St Macartan’s luck was summed up in the 28th minute when skipper Joline Donnelly clipped a shot off the upright, across the face of goal and wide.

Indeed, St Macartan’s went without a score from the 15th minute until five minutes into the second half, and Carnacon were well in control by then.

From there until the finish it was simply a matter of keeping the scoreboard ticking over for Carnacon, as their goalkeeper Michelle Higgins preserved a clean sheet with an excellent late save to keep out Lynda Donnelly.

Fitzgerald collected 2-3 as the beaten finalists of 2014 and 2015 made it through to a third All-Ireland decider in four years, but only after extra-time at Bray Emmets GAA club.