Crokes and Nemo Rangers comes with all the trimmings 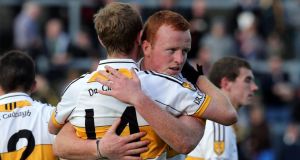 Colm Cooper and Johnny Buckley of Dr Crokes at the end of the Kerry county club final against Austin Stacks in Killarney. Photograph: Donall Farmer/Inpho

Johnny Buckley is in Dublin and on message. The experienced Kerry forward is in town to promote Sunday’s AIB Munster club football final in which Dr Crokes, his club, will face Nemo Rangers.

It will be a tie with all the trimmings; history, star talent, deep tradition. Colm Cooper ticks all of those boxes in his own right, and will line out alongside Buckley for holders and All-Ireland champions Crokes at Páirc Uí Rinn.

Cooper’s testimonial dinner event in Dublin last month divided opinion, some claiming the greatest forward of his generation deserved everything he got, others suggesting he had broken some sacred, unwritten rule by cashing in on his career.

Buckley, asked about the issue, plays it straight bat, acknowledging that Cooper took some flak in the media but insisting he handled himself well throughout it all.

“It was tough there when a lot of the stuff was going on,” said Buckley of the testimonial storm. “He was below training with us and kicking around. He was the same normal fella. We were only delighted to have him around the place, and we’re delighted for him that it went well for him in the end.

“Being the first one to do it, there was always going to be that uproar. I think throughout the whole thing he handled himself impeccably. It all worked out.”

Buckley himself was unable to attend the event. “I know a lot of the lads were up there. It was a great celebratory event. We’ve been lucky to be playing with him for a number of years, we’ve seen the ups and downs. We were delighted for him to have a night where he could celebrate his career.”

Cooper is expected to line out for Crokes on Sunday despite failing to start either the county final or the provincial quarter-final win over Clonmel Commercials due to an apparent injury. He was back for the semi-final win over Kilmurry-Ibrickane, shooting nine points and looking back near his best.

“He had a knock that was holding him back a small bit,” said Buckley. “It wasn’t allowing him to play fully, and he was probably worried about doing further damage. It took a bit of managing from the management and the medical team to allow him to play as much as he could without doing too much damage. He has come out the other side of it. He’s flying fit.”

Crokes and Nemo last met in a Munster final in early 2011. Nemo led by 1-13 to 0-3 at half-time yet still only won the game by two points. Crokes have claimed four Munster titles and an All-Ireland since. They are favourites to retain their crown on Sunday, but who knows.

“That [2011] Crokes team wouldn’t be too dissimilar to what we have now,” said Buckley. “Fellas have a few more years on the clock; there is definitely that bit of experience there. Looking back, it is a game that stands out for this group in that we learned plenty from it. We were working off county championship pace and weren’t ready for a Munster championship-style match. We were just blown out of the water that day for sure.”