Having gone into Adelaide a rookie, Galway forward says the biggest lesson is to relax 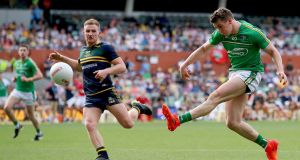 He was so close to making a spectacular statement at precisely the right time. Galway’s Shane Walsh, an artful, creative player who for many wouldn’t have been an instinctive choice for the hurly burly of international rules where the inclination to toe-tap and look around for a likely incision is akin to a death wish.

In the dying seconds however with Ireland 10 behind he runs onto a ball and with the minimum of effort and maximum of control, he flicks it into his hands and makes for goal before the shot disappointingly blusters wide of the far post.

“I might have had a goal right at the end. That would have taken their lead down to a few points. I probably had more time than I realised – again that’s something I’ll take into the next game. With the second Test to come, I probably should have tapped it over the bar but I opted to have a go.”

It was still an encouraging debut. Walsh got onto the ball and spread around a couple of recognisable passes but also got pressured into less accurate deliveries: all in all, a typical enough introduction to the game.

“The training at home can do a lot but it can’t fully prepare you for what you get in a game like this,” he says. “The pace was fast and furious. The big thing I took out of it is to be more relaxed and I think we will in the second test.

“I wasn’t backing myself as much as I might have, especially when it came to running at them. It’s something I’ll be looking to do the next day. They’re no quicker than us; they’re no stronger than us. I feel I can create more space, get the head up and pick the pass – don’t rush shots or passes.”

The scoring system allows the game to get away from teams in a comparatively short space of time. That was Ireland’s experience when slipping from a 10-point lead in the second quarter to losing the third quarter by 8-22.

“When you make mistakes in this game, you get punished quickly,” says Walsh. “You can go from having a big lead to being behind very quickly.

“The third quarter was the most difficult. They had the run on us and you just felt under pressure all the time. That’s what happens when things are going against you. It was hard going but in fairness we recovered and came back well in the last quarter.

“Not having a full squad meant we all had to play that bit longer. I probably played 60-65 minutes. I learned a lot about the game – we all did and I’m sure we can make it count next Saturday. It’s a great game to play, really enjoyable. It’s all about pace and attacking. Mind you, it would be a lot more enjoyable if we won. We have to make sure we do that next time.”

Among the things Walsh picked up was the at times bewildering pace at which the Australians can move the ball but he also detected weaknesses.

“One thing that struck me though was the quickness of their hands. But you can read their plays too and when you get close, you can block their hand-passes. It’s something for us to take into the next day. They wouldn’t be as confident kicking the round ball so they like to create space with the hand-pass so they’ll have a bit of time to line up a kicked pass or a shot at goal.

“Don’t get me wrong, they were happy enough on the round ball but I suppose you’d expect that from such top players.”

Of all the rules in the international game that he might like to see imported into football, Walsh is enthusiastic about the restriction on hand passes.

“Six hand-passes and then you have to kick it – something maybe to look at in our own game. It would speed things up.”