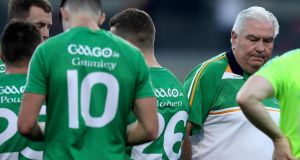 Ireland manager Joe Kernan has criticised the match officials in Saturday’s second international rules test in Perth. Although he accepted that the better team had won the Cormac McAnallen Cup - Australia stealing up late to clip the test 53-50 and seal a 2-0 series victory - he said that he would be looking for clarifications from the authorities.

“I thought the refereeing was diabolical. Michael Murphy was tortured all day. If you look at last week we had handy frees given against out full-back line for holding men’s hands. Murphy was being dragged all through and never got a free.

“Aidan O’Shea got a forearm smash right in front of the dug-out. It should have been a straight red but it wasn’t even ticked. Having said that, the losing of the game was ourselves. In fairness to the Australians, they played very well.”

Australia had already lost Joel Selwood to a 36th-minute black card for a late, high challenge on Chris Barrett when O’Shea was bumped off the ball by opposition Man of the Series Nat Fyfe. The video review official deemed that Selwood had to go but cleared Fyfe’s infraction as simply a foul.

It was also announced that Selwood would face no further punishment. There had been a possibility that he might be liable to an AFL suspension were the offence considered sufficiently serious.

Kernan elaborated on his own team’s shortcomings despite the encouragement of a brilliant start, which blitzed the series deficit of 10 from Adelaide.

“Everything we planned to do came up early on. We got two early goals and put them on the back foot. Even in the third quarter when we didn’t play all that well we hung on in there. The game was there for the taking in the last quarter. We just didn’t do enough.

“We were being caught on the ball and we shouldn’t. We should have been moving it. Australia punished big time on that.

“Third quarter, we lost the ball nine times, six times in our own half-back line which you can’t afford to do against a team as good as Australia. You need to move it quicker against boys like that - when they see an opening, they come at you.”

For Ireland captain Aidan O’Shea, who had a storming game, the regrets this week were sharper than in Adelaide.

“Yeah, more so today. Going into the fourth, we were very happy with where we were. We weren’t trying to eradicate their lead early - we knew we were going to have to chip away at them all day.

“In the fourth quarter we went away from what we were doing well and started to move off the mark too early, tried to rush things and getting caught in tackles - the basics that they do really well and we gave them opportunities inside our 40 and it’s just disappointing.”

He was less aggrieved than his manager about the Fyfe challenge.

“Arrah, I’m not going to get into the referee - it was a tough contest between both sides. There were a couple of things maybe but we’re not going to cry over it. We had chances to win the game and our own downfall was our own mistakes.”

Fyfe, oblivious to the controversy, praised his team’s composure in bouncing back from a poor start.

“We really needed cool heads; there was a bit of spice in the game and they were on top of us,” he said. “There was a bit of wrestling going on which showed just how much both sides cared about the result.

“But we just needed to compose ourselves and know that in the back end of the game, our fitness would be superior in some ways.”

Australia coach Chris Scott said that he would like to see the series revert to the old three-test format of the 1980s.

“I would like to (see it),” he said after his side’s victory.

“That’s the short answer but there are complications. There are already some difficulties; it’s off-season for both teams. It’s a long way to go for the travelling team but I think that’s something we could work through.

“It probably depends on how much people get behind it, if there’s an appetite for it. I think you’d have 30,000 advocates walking away from Domain (Stadium) talking about what an exciting game it was.

“I suspect we’ve got some AFL people thinking, the way the ball pinged up and down the ground, no stoppages. I think the potential for the game is huge.”

1 GAA players spend just 2.5 seconds within 2m of each other during play
2 How a GAA club sprang up in east Belfast over Sunday breakfast
3 The Irish Times shutdown sports quiz: Part one
4 Premier League to allow five substitutions per team when games resume
5 ‘Why do you need the money now?’: Schalke apologise for ticket refund questions
Real news has value SUBSCRIBE

The Irish Times shutdown sports quiz: Part one 16:15
Rafa Nadal says he would not travel to US Open in present circumstances 15:09
Premier League to allow five substitutions per team when games resume 14:34
‘Why do you need the money now?’: Schalke apologise for ticket refund questions 13:50
Shane Long signs new two-year deal with Southampton 12:46
Crossword Get access to over 6,000 interactive crosswords