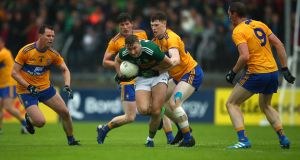 Kerry are on course for a seventh successive Munster senior football title as a result of a deserved six-point victory over Clare in a semi-final game played at Cusack Park Ennis on Saturday evening, in front of a crowd of 5,037.

The Kingdom lead from the start in rainy conditions and the game’s only goal came just before half-time through James O’Donoghue, leaving nine between them and a mountain to climb for the hosts. Kerry lost midfielder David Moran midway through the half on a black card but despite his absence, the visitors held sway and went in 1-9 to 0-3 in front at the break.

Clare were lucky not to concede a pair of opening half goals when Kerry centre-forward Seán O’Shea hit the butt of the right upright on 11 minutes. Moments later O’Donoghue blazed wide from close range with the goal at his mercy.

In the second half Kerry forged ahead and though they lost Tommy Walsh on a black card and Mark Griffin on a second yellow, Peter Keane’s men looked comfortable. Clare did rally as the half progressed and kicked seven of the last eight points. The game was held up for nine minutes following a clash late on between Kerry’s Seán O’Shea and Clare’s Kevin Harnett. O’Shea managed to walk off unassisted but Harnett had to be stretchered off the field of play.

After the game Kerry manager Keane, in his first championship game in charge, was asked about how tricky coming to Ennis can be for Kerry.

“We were very happy at half-time, particularly the second quarter. I thought we had a great second quarter. In the first quarter we just weren’t getting the results. I think we missed, maybe, three goal scoring chances in that period of time. And if had got any one or two of them in, we could have gone off on a canter. But it didn’t happen. They (Clare) fought very gamely in the second half and it was there to be fought to the end. We are now looking forward to a Munster final.”

Clare manager Colm Collins was proud of his side’s effort but rued a number of missed chances to put pressure on Kerry. “We showed great spirit in the second half but unfortunately our shooting boots weren’t on,” he said afterwards. “We missed a lot of easy chances and if it came down to a score you’d never know what would have happened. But I was very proud of the lads in the second half, I thought they gave it everything.”