Weekend football previews: Armagh and Cavan slug for a place in Ulster final 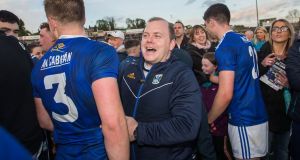 Cork v Limerick, Páirc Uí Rinn, 7.0 – Limerick have already brightened Cork’s season by taking Tipperary off the road at a time when the counties’ convergence was causing anxiety amongst the southern neighbours. Billy Lee’s team put in a terrific display and will head to Cork in good form. Ronan McCarthy’s team finished the league season in better form than relegation suggests and will be confident of handling this.

Clare v Kerry, Cusack Park, Ennis, 7.0 – For the fifth time in four championships, Clare have to square up to Kerry and as manager Colm Collins has protested, it has a numbing effect on the team that on league status is the second-best in the province even though they struggled to overcome Waterford. Two years ago, Clare gave the champions plenty to chew on before fading but last year in Kerry there was no ambiguity. Peter Keane has a number of selection issues for his first championship outing with a number of injuries, particularly in defence, constraining his choices. The Clifford-Geaney-O’Donoghue full-forward line however should be enough of itself.

Kildare v Longford, O’Connor Park, Tullamore, 3.0 – A great result for a battling Longford team but the late chance in normal time when James McGivney hit the post will haunt them. Pádraic Davis welcomes back captain Donal McElligott from suspension, which will lift the team. Kildare got a fine display from Adam Tyrrell but for a second match running they failed to execute like hot favourites. Longford will be undoubtedly be emboldened but despite the spirited refusal to buckle last week, the better chance may be gone.

Armagh v Cavan, Clones [Deferred, BBC NI] – Even allowing for the competitiveness of the Ulster championship this match presents a great opportunity for all concerned. Armagh haven’t been to a provincial final for 11 years whereas Cavan go back to 2001 for their most recent.

Both have reason to be pleased with the quarter-final successes: Armagh because Kieran McGeeney desperately wanted a championship win and Cavan, who hadn’t clipped neighbours Monaghan in the 18 years since they last reached an Ulster final.

Armagh’s victory, also in a local derby with Down, started underwhelmingly but picked up, as McGeeney rolled a bench that always looked more formidable in places than the starting team. Andrew Murnin, Stefan Campbell, James Morgan and Mark Shields all came on to telling effect and even allowing for extra time, a 2-4 haul was impressive.

Cavan were impressive in taking down Monaghan and Mickey Graham has altered their style with an emphasis on creating space and, incidentally, the 1-13 winning margin was their highest score in the fixture in 47 years.

Graham has drilled the team impressively with the advantage of a season in Division One and they look well positioned to make a further breakthrough here.