Armagh chasing return to big time after decade in doldrums 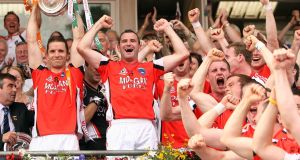 Armagh’s Paul McGrane lifts the trophy after victory over Fermanagh in the Ulster football final replay in 2008. Photograph: Cathal Noonan/Inpho

When Armagh last won the Ulster championship, 11 summers ago now, the supporters could have walked through the celebratory drill in their sleep. They were, emphatically, the kings of Ulster. This was their seventh provincial championship of the decade. It seemed like they could win the thing out of habit.

It was a more troubling task trying to place their achievements in the national context. The debate over the best team of the 2000s is generally considered to be a straight shoot-out between the claims of Tyrone and Kerry. But it’s too easily forgotten Armagh brushed tantalisingly close to three-in-a row All-Ireland greatness.

After winning their first All-Ireland in 2002, they lost the 2003 final to Tyrone; fate was diverted through Conor Gormley’s immortal last-minute blockdown on Steven McDonnell’s shot on goal. In the summer of 2004, Armagh were arguably at their peak when they were unseated, in an hallucinogenic All-Ireland quarter-final, by the ingenious brand of catch-me-if-you-can engineered by Fermanagh. Charlie Mulgrew’s men moved the ball so slickly through the narrow pockets of space available that the Armagh mean machine couldn’t lay a finger on them, let alone a meaty bicep.

The ifs, buts and maybes remain theirs to consider and repent but one of the frustrations for a fiercely driven and serious football squad was that they did not add to that maiden All-Ireland. They were good enough to at least claim two. With luck, it could have been four. But all of that is conjecture.

What makes Armagh so interesting this Sunday, as they march behind the band in Clones tomorrow shortly before 2pm, is how suddenly and lastingly the successes disappeared. It had taken a replay for Armagh to dispense with novel finalists Fermanagh in that 2008 Ulster final. By then, the original All-Ireland team was breaking up: Kieran McGeeney, Oisín McConville, John and Tony McEntee and Enda McNulty had all left the scene. These were huge voids to fill. Afterwards, manager Peter McDonnell spoke of the obstacles his squad had overcome between the draw and the replay.

“Where we lost last week, I suppose was in an area that asks questions about masculinity. And that is breaking ball. And it was a big insult to our footballers last week we were prepared to concede so much of it. And that is what we tackled and dealt with and that gave us the platform to go ahead and win this game. We were poor last week. We did the simple things well this week. Winning a provincial crown is a hell of an achievement in any championship. And we answered the critics – which were many – this week.”

The remarks hint at external forces exerting internal pressures and that was the case. McDonnell was and is respected within Armagh and succeeded Joe Kernan after successful managerial terms with his club, Mullaghbawn and the Armagh Under-21s. But it had been widely anticipated Paul Grimley would be chosen to take up where Kernan left off. A shock quarter-final exit to Wexford in 2008 and an underwhelming 2009 championship prompted McDonnell to step down. That December, in his annual report, county secretary Paddy Óg Nugent didn’t hold back in detailing the obstructions he felt the manager had faced during his tenure.

“The treatment meted out to Peter McDonnell, a man of utmost honesty and integrity, was absolutely despicable and should be publicly condemned as it has no place in our sport. He stated that he had been put in an impossible situation by a number of so-called influential people outside of the team and county board who had continually tried to undermine his authority and what he was attempting to do with the senior squad. This, he said, came to its lowest ebb, when he became aware, two days prior to the qualifying game with Monaghan, that the changes to the team he had announced earlier in the week and the tactics he was intending to adopt for the match were given directly to a member of the Monaghan management team.”

Nugent was one of the most efficient and even-handed administrators in the association – firebrand wasn’t his style. The comments spoke of a salutary tale of just how fractured things can turn in any county when a once-in-a-generation team breaks up. Former players have definite and strong opinions on the future direction of the squad; the county board has another: the current players and management become caught in the middle.

The cracks had begun to appear even before Kernan stepped away. The Crossmaglen man had famously prophesied just hours after the All-Ireland triumph of 2002 that things would never be the same again. Now that Armagh had achieved the impossible, everyone would become an expert on how to win an All-Ireland. Several years after he stepped down, he noted in his newspaper column in the Irish Independent that by 2006, “information was leaking through our camp as though from a sieve”.

Where once Armagh’s training regime had been a thing of feared rumour, it seemed as if everyone knew what they were up to in the end. The aura disappeared. When McDonnell stepped down in 2009, it was again widely assumed Grimley would take charge. Instead, after failing to secure a letter from the Armagh board containing certain reassurances he needed, Grimley accepted an invitation to join Séamus McEnaney’s backroom team in Monaghan. Somehow, the county had once again failed to make the obvious appointment.

Former Down All-Ireland winner Paddy O’Rourke agreed to take the post and although he guided the team back to Division One in the league, they had –unbelievably – become a bit player in the Ulster pageant. Monaghan, Derry and Tyrone took turns in serving up beatings to the Orchard county in successive summers.

Stranger still for the Armagh faithful was that Donegal, the county they had enjoyed tormenting in their pomp and whom they had massacred as recently as 2010, were now the All-Ireland champions. O’Rourke stepped down that July, with McConville commenting on RTÉ he sensed “an apathy towards our county team” and he called on the public’s support.

But in 2013, it was Cavan’s turn to get in on the act of cold revenge. The 1-15 to 1-11 defeat they inflicted on Armagh in the preliminary round prompted Grimley to offer a public apology to the supporters. “If you feel I have let you down in the way we approached the game with reference to our tactics let me sincerely say sorry for the hurt I caused.”

Faith remains undimmed that if anyone can help them recapture the old momentum, it is their former captain

The quality of the training was evident in the flashes of high-calibre performances the team had begun to produce. They took Monaghan to a replay in the Ulster semi-final of 2014 and had a significant qualifier victory over old enemies Tyrone that July. By then, Peter McDonnell was back in the dressingroom, alongside Kieran McGeeney, as part of Grimley’s backroom team. And afterwards, McDonnell spoke of what the players had come through.

“There has been a lot of criticism levelled against them and they haven’t stopped. When you walk into a dressingroom after an event like this and see lads on their hands and knees crying because of how much it means to them, that’s something to be proud of.”

It was something to be proud of and it set them on a path that would lead to the old familiar trappings of Croke Park and a riveting All-Ireland quarter-final against Donegal which would finish in a narrow defeat. But it felt like the old Armagh. Shortly afterwards, Grimley stepped down and McGeeney became the furnace behind Armagh ambition, just as he had been on the playing field.

Rebuilding the morale and resistance has been a slow and at times bruising process. Donegal, Cavan, Down and Fermanagh would go on to knock Armagh out of the Ulster championship over four successive summers. After a terrific run through the qualifiers in 2017, they found Tyrone primed and ready in the All-Ireland quarter-finals that year.

On the surface, McGeeney’s provincial record looks bleak but injuries, the unavailability of key players and plain bad luck contributed to what was a frustrating period. Through it all, McGeeney has had the loyalty of the squad and the backing of the county board – faith remains undimmed that if anyone can help them recapture the old momentum, it is their former captain.

That is why tomorrow’s match against Cavan feels like a crucial afternoon for Armagh football. Lost games can turn into lost seasons which quickly can become lost decades. For a brief few years, Armagh didn’t have to worry about that: everything flowed. The story of Armagh football over the past 10 years is the story of decent people trying to do their best to respond to the fact that their county had relinquished a power that, at its height, appeared to be close to omnipotence. At their best, Armagh were a frightening prospect. Other teams withered in comparison – including the subsequent Armagh teams who have had to live in their shadow.

The wild celebrations which followed their extra time win over Down last month were understandable given it was the first Ulster championship win of the McGeeney era. In fact, it was also just the third provincial championship win the county supporters had witnessed in a decade.

And on Sunday, Armagh will attempt to win two Ulster games in a row for the first time since they last lifted the Anglo-Celt in 2008. It’s a big task. But if they can somehow get back to an Ulster final, to the old stomping ground, it will all seem new and magical again. It has been that long.