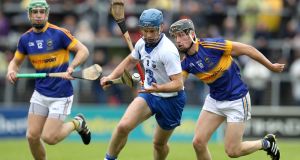 This will have been highlighted by the teams as an opportunity and a threat, respectively.

Carlow have had a commendable campaign to date, proving difficult to shake off for Galway and, as manager Colm Bonnar pointed out, winning the second half against Kilkenny although admittedly after the visitors had run up a big enough first-half score to be able to ‘declare’.

Dublin’s draw against Wexford was the first point they had picked up against one of the top three counties in either year but it doesn’t change the imperative not to lose here. Subsequent results have actually cast Mattie Kenny’s team in a better light.

Kilkenny are the only ones to have won their first two matches and Wexford took a further away point in Galway, who come to Dublin in the final round. There’s no doubt that the pressure is on the visitors but well-flagged ambushes seldom come to pass.

Few envisaged the circumstances in which this would take place. Waterford’s travails would have been foreseeable but for the All-Ireland champions to be struggling to stay afloat was not. This may however be a therapeutic way back to the table.

Limerick will be bringing decent support on a couple of special trains and the pessimistic view locally is that the home support could be outnumbered by as much as three to one, such is the gloom that has descended on the county.

This is based on a host of misgivings after two defeats on the bounce. There was some encouragement in both matches but losing the first of the trumpeted home matches created immediate pressure even if the attempted comeback against Clare came very close.

For a while with 14 men in Thurles, they made Tipp look somewhat less sensational than the current estimation even if the wheels inevitably came off on the run-in. Of overarching concern though is the inability to put up bigger scores given the going rate of scoring amongst the top teams.

Limerick of course weren’t shooting the lights out in the Gaelic Grounds and only Cork shooter Patrick Horgan’s peculiar flirtation with squandermania prevented a spectacular thumping.

They have had a fortnight to recover and it’s likely that a response will be found and there is plenty of upside after the anaemic opening  match.

Michael Walsh is expected back for his 17th championship for Waterford to provide some muscle, which will be needed if Limerick rediscover the full power and energy of their ‘A’ game. Whether they do or not, they’ll likely live to fight another day but on that score it’s not looking great for Waterford.

A year on from the decisive crossing of the counties’ graph in Thurles when, leading by four with five minutes left, replacement Jake Morris hit the post for Tipp and within 20 seconds of the clearance, Podge Collins had set up Ian Galvin for a Clare goal, the platform from which they built a first championship win in Semple Stadium in 90 years, they re-engage.

Clare did what they had to in Waterford but will have been alarmed at how close their good work came to being undone whereas Tipp have been reconstituted in the classic frame of what they do best.

To date the speed of their hurling and clever movement have torn great holes in the defensive arrangements of Cork and Waterford, laying quietly to one side all those reservations about their lack of top-gear pace.

This promises to be their biggest test, however, as Clare in Ennis is one of those daunting propositions that has been highlighted by the new format and after Limerick’s defeat two weeks ago, both teams boast the remaining 100 per cent records in the province.

A cool appraisal of Tipp so far is that Cork were poor and Waterford reduced by Conor Gleeson’s red card; yet they had to pedal fast to lead the first match at half-time and trod water in the third quarter in Thurles.

Clare have plenty going for them from the roving menace of Tony Kelly to a decent full forward line and an excellent free taker. The season can hardly unfold as one seamless stretch of triumph for Tipp and the performance here will be a key diagnostic. But they can satisfy the scrutiny.