Bernard Brogan still determined to contribute to Dublin’s cause

Now 35, the 2010 Footballer of the Year says he is in the best shape of his career 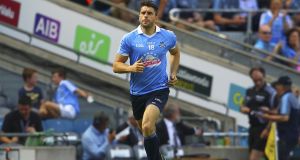 Bernard Brogan: “For me, it’s a very personal journey now and trying to see can I get back up to the level, to add value.” Photograph: Ken Sutton/Inpho

At first, it sounds like Bernard Brogan is subliminally planting the sponsor’s message. At the launch of SuperValu’s 10th year associated with the football championship, he refers constantly to “adding value” to the Dublin team and panel.

Behind it all though is the question that most haunts elite performers in the twilight years; am I valued, at this stage of my career?

And what a career. It’s nine years since he was Footballer of the Year after an unsuccessful year for Dublin but an electric championship for Brogan. A year later he was invited to the Obama White House as part of the St Patrick’s Day invasion and was spotted deep in conversation with then VP Joe Biden.

When Dublin started picking up All-Irelands he was in the thick of it: 0-4 from play in the first final win, against Kerry, 2-3 in the next when Mayo were beaten, scoring and creating two goals in little over a minute as the semi-final replay, also with Mayo was turned on its head just before an hour had passed.

I hadn’t played or started in the All-Ireland final so I was thinking, ‘I have to tune into this, I’m going to give this everything I have’

The three years that followed have been in a different key. Dropped for the replayed final against Mayo in 2016 and not selected for the following year’s, he made a determined attempt to arrest the decline last year only to injure his cruciate ligament.

A valiant comeback was completed in near-record time to give him a run-out against Roscommon in the quarter-final group but it was never going to be sufficient to get him in the frame for All-Ireland semi-finals and final.

Now, he’s back and, according to himself, in the shape of his life having reduced to 82 kgs and hitting personal bests in all sorts of tests, eager or desperate to get back into contention for a place in the match panel.

He says he didn’t expect to play in last Saturday’s opener against Louth but hopes to be in contention in the coming weeks.

“Last year, the way it went, I could have easily retired. I could have gone off and I would have been fine, and no one would have questioned you. For me, it’s a very personal journey now and trying to see can I get back up to the level, to add value.

“And the answer was ‘yes’, and that was my motivation to go again. I still believe that I have the skilled football and the guile and bit of experience, that I can add something different to the group that’s there.

“If I didn’t think that, I would have retired or Jim would have said, ‘Do you know what, we don’t need you any more, we’ve enough there.’”

Before last year’s injury, Brogan had really set out to impress after the indifferent previous years. Hungry for action, in the mortuary atmosphere of early league matches he lit up the first round, kicking a point and artfully providing the assist for both of Dublin’s two goals against Kildare.

When I go into that group I’m going to stand tall and look everyone in the eye and smile, just try to portray positivity

Then at a training session, the season effectively ended. Had he intended 2018 to be the year of one last crack at re-establishing himself?

“Yeah, very much last year like not that I was thinking, ‘this is the end of it’ but I was saying the year before hadn’t gone well. Obviously I hadn’t played or started in the All-Ireland final so I was thinking, ‘I have to tune into this, I’m going to give this everything I have, I’m going to prep well and hit the ground running’.

“I’ve always played well when I’ve got game time and momentum so I asked Jim, ‘Just put me in from the start, O’Byrne Cup, anything, just play me’. I know I’ve played championship loads of times but I want to play every minute that you’ll give me and that really was my plan before the injury.

“Maybe I overdid the training or whatever, and the leg broke down, but yeah, I was very much tuned in, very much the same now.

“I’m in the best shape I’ve probably ever been; my fitness scores are the best they’ve ever been. I’ve really focused in on where I can add value and what I need to do physically to get there so I’m striking the ball and practising my kicks and my percentages are way up.

“I’m trying to put myself in a position that Jim has to take notice of me and has to say, ‘do you know what – this guy can do a job for me when it’s needed’.”

Since his early years, the fitness fashion has switched from power and explosiveness to lean and hungry. Brogan has obliged.

“I’m that bit lighter and able to get across the ground that bit more easily. I would never have been good at endurance but my scores now on those tests are better than ever.”

He also completed the hardest journey, towards acceptance even if he’s still fighting it.

“There have been loads of tough days, trying to find motivation. I got one really positive reaction when I was dropped by Dublin for the first time before the Mayo replay in 2016. Jim told me before [he told] the group. I said to myself, ‘do you know what? When I go into that group I’m going to stand tall and look everyone in the eye and smile, just try to portray positivity’.

“I did that and got a lot of feedback about how that mattered to the younger guys. So I have tried to be positive and I’ve got a lot of energy from my own mental journey and hopefully the opportunities will come where I’ll be able to add something.”