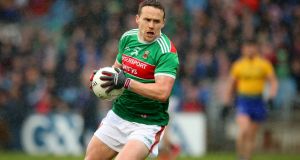 Andy Moran has been around long enough not to be easily discouraged. Just two months ago, he sounded a note of caution when accepting the garlands for a typically exuberant cameo off the bench, as Mayo picked up silverware in this year’s league final.

“Does it vindicate staying on? Yes it does – 100 per cent it vindicates it but, you know, it’s a long summer yet,” he said of his decision to accept an invitation to keep going at the age of 35.

Summer, though, wasn’t long throwing a spanner in the works. Before the June bank holiday has even begun, Mayo are in the familiar position of being out of the Connacht championship, with the final not even due for three weeks.

It’s not the way the world looked at the end of March, as James Horan opened his second spell as manager by picking up a national title and heading for the summer hoping to oust Galway in the province. But then, for the first time in 18 years, Mayo were ousted by Roscommon.

We tried our damnedest to win it last Saturday and it didn’t happen. So did it affect us? One hundred per cent but it doesn’t stop us

“Oh yeah,” says Moran, “a hundred per cent yeah. It’s a tough loss; we wanted to win a Connacht championship. I remember walking out in 2015 thinking, ‘we’ve won five in a row,’ and we probably took our eye off the ball over the years, I suppose, trying to capture the big one.

“And now we haven’t won in, it will be five years next year, so the momentum of this year, of course, but the momentum over the last four years has been lost and we need to get back to winning Connacht championships.

“We tried our damnedest to win it last Saturday and it didn’t happen. So did it affect us? One hundred per cent but it doesn’t stop us. We literally just move into a different competition now, and you just move on.”

Mayo are used to the different competition by now, having scraped through the qualifiers to reach two All-Ireland finals before getting derailed in Newbridge last year, leaving a county unshakeably associated with the closing stages of the All-Ireland – semi-finalists at least for seven straight years – out in the cold just as the new Super-8 format was beginning its first trial year.

“I remember coming down on the bus after the Kildare game,” says Moran, “and all the young fellas’ phones were ringing to go to America, and me and Keith Higgins were sitting beside each other, thinking, ‘why is there no one ringing us?’”

There is advantage in knowing the ropes. Moran stresses the importance of winning the first match or, if that is too obvious, being prepared for it and aware of pitfalls. They won’t enter the lists until round two, three weekends into June, and he is confident that injuries will have eased by then.

Fionn McDonagh, Donal Vaughan and Séamus O’Shea are all expected back. And Cillian O’Connor. How much of a loss last weekend?

“Ah, Cillian’s a loss – like, he’s 26 and he’s our top scorer in championship history.”

He’s adjusted to the Roscommon defeat, personally a challenge in the GAA frontier town of Ballaghaderreen, where he lives – although he adds that, working in Castlebar, he was able to escape every day.

He says he’s undaunted by the prospect of rolling the rock up the hill again. That’s how Mayo got closest to dethroning Dublin in 2016 and 2017, but he also knows that the sceptics are circling after Saturday’s setback.

We’ve been written off many times before. They could be right, they could be wrong but all we can do is go back training

“People seem to think we were playing against a team that was in Division Four. We played against Roscommon, who were in Division One, and they should have beat Tyrone and Dublin in the league.

“Galway are there as well. We’re playing against good teams, you just have to move on and learn the lessons.

“We’ve been written off many times before. They could be right, they could be wrong but all we can do is go back training. We got back on Wednesday night and had a really good session. Prepare for three-and-a-half weeks’ time and see how we get on. The journey awaits us and we just need to get on and get moving.”