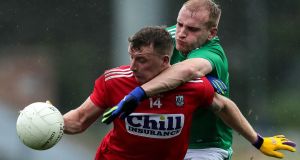 They stunned the visitors by scoring three goals inside the opening 12 minutes after Limerick almost grabbed a sensational goal themselves from the throw-in.

Tommie Childs picked out Seán McSweeney, whose shot hit the post, rebounded off the body of goalkeeper Mark White and onto the crossbar before Cork scrambled the ball clear.

Brian Hurley grabbed the first of his pair of goals in the fourth minute following a Ruairí Deane pass and the duo also linked for the second goal 90 seconds later.

Limerick were shellshocked by Cork’s third goal in the 13th minute, when Deane soloed through to make it 3-4 to 0-0.

And it could have been even worse for Limerick because an upright denied Hurley a hat-trick from a penalty just before the interval.

At 3-8 to 0-2 ahead, Cork simply went through the motions in the second half as both sides emptied their benches.