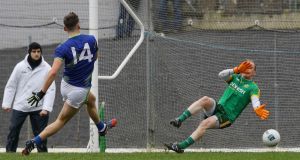 Kerry were made to sweat all the way to the finish in Fitzgerald Stadium, despite twice holding an eight point advantage over their visitors. It made for a nervy finish for the home side as they saw their 1-17 to 1-9 lead on 60 minutes whittled down over the remaining quarter of an hour’s play.

Meath showed real tenacity to battle back into contention, starting with a well-taken finish by Bryan McMahon on 62 minutes. McMahon took advantage when a Bryan Menton ball into the danger zone was deflected into his path by the defending Paul Geaney.

With just five points between the sides the confidence began to surge through the Royals and they could have had a second goal in as many minutes were it not for an excellent save by Kerry goalkeeper Brian Kelly from Thomas O’Reilly, who followed up with the rebound for a point to keep the pressure on the hosts.

Meath had it back to a three point game by the 70th minute (1-18 to 2-12) and, indeed, could have been closer or even ahead had Kelly not saved smartly from the excellent Dónal Keogan.

That was as good as it got for Meath, however, as Kerry managed to compose themselves, largely thanks to a David Clifford score from play.

“It was (a struggle),” Kerry boss Peter Keane conceded after the match. “Ah sure look you’re playing Meath. We went up to play Meath last year in Navan and we struggled enough against them. Three points was it in the end? It didn’t feel like that you know, it was tight.

“Meath are a good team, they’re well managed they’re well structured, they fought like hell for everything they got, they’re no bad team. I know they’re in a situation where they’ve lost four games, but I’ve been looking at the other three games, there wasn’t much in them.

“I don’t know are you coming here thinking we’re going to beat these by 20 points, we certainly didn’t come to the game today thinking that.”

The first half seemed to be going along expected lines with the Kingdom taking a commanding position, shooting 1-5 without reply inside the opening 16 minutes. Keane’s men opened the scoring less than a minute in through Geaney in what turned out to be an early statement on intent.

Kerry soon doubled their advantage through debutant David Shaw and were further boosted on four minutes when Meath’s Cillian O’Sullivan was dismissed on a black card for a pull down on Jack Barry.

Meath initially seemed to be coping quite well with the loss of a player, dropping men deep and seeking to bottle the Kingdom up. With O’Sullivan’s time in the bin drawing to a close, Kerry had only tacked on an additional two points (both frees by O’Shea), but just as the clock ticked into the 14th minute they struck for the game’s opening goal.

Micheál Burns sent the ball towards his Dr Crokes teammate Shaw and the newcomer flicked it on for Clifford to take advantage of a mix up in the Meath defence. With the score 1-4 to 0-0, it looked bleak for Meath.

The return of O’Sullivan, however, seemed to spark the Royals. He kicked a point to halt Kerry’s scoring spree and Meath then got a run on Kerry’s kickout, winning four in-a-row against the head as they fought to get back into the game.

Their pressure was rewarded with a Keogan on goal on 19 minutes and they had it back to a two point game before they lost the goal scorer to a second black card, which allowed Kerry to rebuild their advantage.

The loss of those players to black cards in the first half particularly irked Meath manager Andy McEntee.

“We have this discussion every week,” he said post match. “It seems to me since we made an issue of some black cards that weren’t doled out up in Tyrone it seems to me that we’re on the receiving end of it. Maybe I’m just being paranoid, but just because I’m paranoid doesn’t mean they’re not out to get you!”

Nevertheless the Meath boss was relatively satisfied with how his men performed.

“I thought it was a fantastic performance we were definitely slow out of the blocks, we weren’t getting contact with Kerry in the first ten minutes and they raced into a 1-5 to no score lead and from then on we certainly gave it as good as we got and I thought some of the performances, some of the individual performances, were great, but even as a team I was very, very happy with the vast majority of it.”

The result leaves Kerry back on track for a place in the league final and leaves the Royals with a near impossible task to retain the Division 1 status for 2021.

Liverpool could seal title win at Anfield when they host Crystal Palace 20:43
Lifting the lockdown: what does it mean for sport? 19:33
GAA club matches to return on July 31st with intercounty games in October 19:13
Betting shops face uncertain future as they prepare for Monday reopening 18:53
Ghaiyyath blazes a trail to take Coronation Cup at Newmarket 16:27
Here is your handy guide to sport on television this week