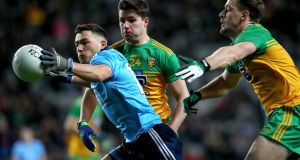 The drama continued under Saturday night lights in Croke Park at the weekend, as Dublin maintained their habit of slow starts and frantic finishes to touch off Donegal in an entertaining Allianz Football League encounter.

The narrow victory continued two distinct trends: Dublin’s talent for escapology but also whatever its reverse might be, as demonstrated by Donegal’s habit of losing sizeable leads in their fixtures to date.

New Dublin manager Dessie Farrell continues to be unbeaten this season – the only manager in the top half of the league to have that distinction – but he made it clear that this isn’t top of his list of priorities.

“Very happy to get the result. Getting two points at this stage takes a little bit of pressure off now for the remainder of the league,” he said afterwards. “The league for us is about looking at new players as well and thankfully that gives us another opportunity to do that for the remaining matches.”

Again they started slowly, stayed upright, if on the ropes, before gradually gaining the upper hand in the final quarter. Farrell acknowledged that the temperature was now rising in the league.

“I think it was quite visible outside tonight, in terms of Donegal: their organisation; their movement was very good at times and they were asking some serious questions of us. So it definitely took us a long time to get to grips.”

Michael Murphy was deservedly named Man of the Match after again showcasing his exceptional ball winning and shooting accuracy and in the process, Donegal’s eternal dilemma in needing him everywhere.

In the early stages, he was orchestrating a dominant opening for his team and proving the hinge on which Hugh McFadden’s sixth-minute goal swung. In what summed up Dublin’s opening, Brian Fenton stumbled and lost possession over the line and within moments Murphy had sent McFadden on his way with a deft hand-pass.

In a surprise selection, Farrell started Craig Dias, the Kilmacud man’s first appearance for the county in eight years, at centrefield instead of James McCarthy, who was reported to be nursing an injury. It was a tough reintroduction given the athleticism of McFadden and he made way at the break.

Analysing the win, there was a rough consensus that Donegal should have been farther ahead at half-time, needed to be more clinical with goal opportunities and were ultimately undone by a reversal of fortunes either side of the hour mark.

On the first issue, the Ulster champions held their biggest lead just after half an hour, 1-6 to 0-04, but allowed Dublin make up ground with three unanswered points thanks to the again impressive Seán Bugler, a Dean Rock free and in injury-time from Ciarán Kilkenny.

The second matter of wasted goal opportunities needs to be qualified by the fact that Evan Comerford, continuing his apprenticeship for the injured Stephen Cluxton, was Dublin’s most obvious Man of the Match candidate. Three times he prevented goals and if Donegal twice pointed the rebounds, Jamie Brennan and Peadar Mogan reacting well, the third intervention was critical.

A penetrating run by Eoghan Bán Gallagher and a 1-2 with Niall O’Donnell opened up the 58th-minute chance for Patrick McBrearty but the Dublin ’keeper saved when a goal would have stretched a 1-11 to 0-14 lead to four and probably killed the comeback.

Instead, replacement Colm Basquel – proving as hard to handle as basket of eels – wriggled past McFadden, Brendan McCole and for good measure the endline, to equalise and six minutes later the fatal blow fell.

Paul Mannion got under a Brian Howard point attempt, as it plummeted down on the Hill goal. Donegal goalkeeper Shaun Patton had been excellent all night with his restarts but he fumbled the ball and the Dublin forward knocked it into the net off Neil McGee for a lead they never lost.

But just about. It took another turbo-charged run from Davy Byrne in the full-back line to emulate his late equaliser against Monaghan to get the insurance score in injury-time.

Still Donegal nearly caught them with two late points and had Daire Ó Baoill’s hand pass not overshot the runway in the last moments of the eight minutes of injury time, Dublin were looking at a fourth draw in their last five matches in Croke Park.

There was time for Murphy to lose patience with his marker John Small when both were already on yellow, slightly curtailing their involvement.

“It’s the same story as a couple of weeks ago,” said Bonner, referring to the eight-point turnover against Galway. “We probably deserved to get something out of it. It probably turned on two instances – we had a goal opportunity to really make it difficult for Dublin to get back at us, but we didn’t take the opportunity and the goal we gave away was poor. You know, at this level you get punished, and we were punished.”

New Zealand cricketers unlikely to visit Ireland in June 10:45
Uefa say cancelling domestic leagues should be a ‘last resort’ 10:38
Sport will be the last duck in the row, Shelbourne’s triumphant return 07:54
Greener Pastures: Seinäjoki feels most like home for Tommy Dunne 06:30
‘Every team is in the same position – we all just want to play games’ 06:00
Crossword Get access to over 6,000 interactive crosswords