Westmeath were competitive in early stages but sending off proves costly 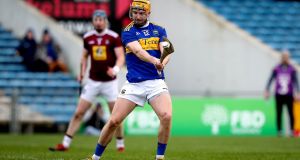 Tipperary’s Cian Darcy scores the first goal of the game in the Allianz Hurling League Division 1A game against Westmeath at Semple Stadium. Photograph: Ryan Byrne/Inpho 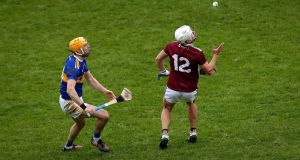 Tipperary recorded their first victory of the Allianz Hurling League with a comfortable 20-point win over Westmeath at Semple Stadium in Thurles.

It was the All-Ireland champions’ first competitive victory of 2020 with the platform laid in the first half as they led by 13 points at the break.

“When we worked the ball through the lines and found the right men we were impressive,” said Tipperary manager Liam Sheedy. “But some aspects of our play in the first half we wouldn’t be happy with, but we did give ourselves the platform to win the game in the first half.”

Westmeath were competitive in the early stages and a Derek McNicholas point from play added to two Killian Doyle frees had them level at 0-3 apiece after 10 minutes.

But after that Tipp flexed their muscles, with three points in quick succession from Jake Morris and Jason Forde before they pilfered their first goal on 16 minutes as Séamus Callanan forced goalkeeper Aaron McHugh into an error and Cian Darcy had the task of the easy finish.

Tipp were choking Westmeath’s attempts to work the ball up the field through the hands, with Alan Flynn and Michael Breen scoring three points between them before Morris scored the second goal on 27 minutes after good set-up play from Niall O’Meara and Cian Darcy.

All bar one of Westmeath’s first-half scores came from Doyle frees as Jason Forde ended a fine half on a high with a sideline cut, bringing his tally to nine as Tipp led 2-14 to 0-7 at the break.

Things didn’t get much better for Westmeath shortly after half-time when Killian Doyle was sent off for a straight red card after a late pull on Seán O’Brien.

After that, the game petered out with Tipperary easing to victory with Callanan putting the seal on it with an injury-time contribution of 1-1.

For Westmeath, it was a sobering defeat after the uplift of the performance against Cork last weekend.

“It’s a very tough one to take to come down here to Semple Stadium and to underperform the way that we did, going down to 14 again proved to be hugely costly,” admitted manager Shane O’Brien.