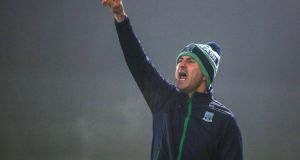 The waiting game goes on for Fermanagh following this setback against Armagh as they continue to keep a strong focus on getting Division One football next season.

But this disappointing performance which lacked energy, cohesion and bite means it’s back to the drawing board in the build-up to next weekend’s crucial clash with Meath.

Having held their own while playing against the wind in the first-half and trailing by 0-5 to 0-4 at the break, Fermanagh had been expected to drive home their advantage after the interval.

Instead they were held scoreless for all of 43 minutes, poor decision-making costing them far too often and they were unable to gain the initiative from their hosts apart from a brief yet ultimately abortive flurry in the closing minutes.

Aidan Forker, the impressive Jarlath Og Burns and Rian O’Neill were among the marksmen who sent Armagh into the comfort zone in a lucrative first quarter before Aidan Breen, Ryan Jones and Declan McCusker were on target to rekindle Fermanagh’s optimism.

Instead, Rory Gallagher’s side were outgunned after the break, the wheels coming off altogether when Armagh substitute Ethan Rafferty blazed through to thunder in the only goal of the game.

Fermanagh’s late efforts to snatch the game out of the fire floundered against a stoic Armagh defence that yielded a brace of token points from Conal Jones and Declan McCusker that only provided the merest hint of comfort for the Ernemen.