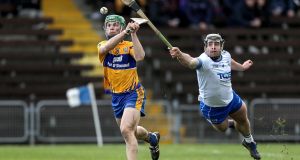 Sixteen points from Stephen Bennett, including 14 frees, steered Waterford to an impressive win at Walsh Park against a Clare side who saw out this League quarter-final with 13 players.

In front of a 2,763 crowd, the hosts over-ran their opening Munster Championship opponents by 0-20 to 1-3, during a second half illuminated by the stickwork of Bennett, Austin Gleeson and Pauric Mahony.

At the break, despite playing with a strong wind, Clare led by only two points (1-10 to 0-11) on a surface which held up well despite the morning’s rain.

Pauric Mahony put the hosts ahead after 40 seconds, with Tony Kelly seeing that effort and raising it to put Clare ahead inside two minutes.

Cathal Malone put the wind to good use with an excellent fourth minute point from the halfway line before Pauric Mahony struck an equally impressive point into the wind from Waterford’s next attack. Peter Duggan converted a seventh minute free following a foul on the lively Gary Cooney, before the impressive Jamie Barron picked out Colm Roche with another excellent strike from distance.

Duggan, scorer of 1-4 in the opening half, turned over a fine free in the 10th minute and he repeated the feat three minutes later.

After 15 minutes, Shane McNulty’s misplaced pass was intercepted by the onrushing Gary Cooney, with the De La Salle man hauling Cooney to the deck to concede a penalty, with Peter Duggan’s shot proving just too hot for Stephen O’Keeffe. Clare led by five.

Pauric Mahony instantly replied with a point before Clare’s Cathal Malone turned over a monstrous effort from his own 65.

Stephen Bennett landed three successive frees before the excellent Peter Duggan found his range over a dead ball from just outside his own 45 after 25 minutes. Aaron Shanagher was next to score after 27, with Stephen Bennett converting another free a minute later following excellent support play by the impressive Barron.

Three minutes from the break, Barron picked out Gleeson down the left flank, from where the former Hurler of the Year nonchalantly bisected the Keane’s Road uprights.

Conor Cleary completed the Banner’s first half tally, which was soon followed by Stephen Bennett’s fifth free of the day.

The second half was colonised by the hosts, who were level by the 37th minute thanks to points from Stephen Bennett (another monstrous free) and Peter Hogan. Shane Bennett steered over a superbly cut sideline to edge Waterford ahead and from that point on they never looked back, with brother Stephen adding a further free just shy of the 40th minute.

Peter Duggan (sent off in the closing moments for a second bookable offence) cut over a sideline ball himself six minutes later but in the context of the second half that proved as good as it got for the Banner.

Only Duggan, with two further points and Tony Kelly would add to Clare’s tally thereafter. And the Banner suffered a further blow in the 61st minute when Conor Cleary received a straight red card following a coming together with Stephen Bennett.

Late scores from Peter Hogan and corner back Shane McNulty provided the icing on top for the victors.