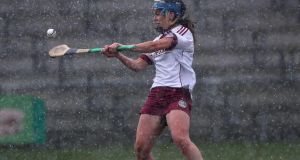 A fine performance from Anne Dalton gave Kilkenny a 0-12 to 0-9 victory over rivals Cork in the Littlewoods Ireland Camogie League Division 1 semi-final in Carriganore.

Only Galway stand in the Kilkenny’s women’s way of becoming just the third team to complete a four-in-a-row as a result of their sensational 2-14 to 0-4 defeat of Limerick at St Brendan’s Park.

Reigning player of the year Dalton was magnificent for Kilkenny, scoring four points from play in a more advanced role than has been the case in recent years and with Michelle Quilty landing six from frees, Ann Downey’s troops were able to turn around a one-point interval deficit to advance to the decider.

Indeed it was in the first half that the foundation for the triumph was put down, given that Cork had the benefit of a very strong wind and struggled to make it count on the scoreboard.

It was Kilkenny that carved out an early two-point advantage, Dalton returning a loose clearance with interest after Quilty had converted a couple of frees either side of one from Orla Cotter, who was Cork’s leading scorer with fivepoints.

Dalton and Katie Power added fine points for Kilkenny but Cotter landed a lovely score from play later on and young attacker, Clíona Healy helped herself to two, one after a brave save by Noreside goalie Emma Kavanagh.

Yet at only 0-7 to 0-6 at half time, the All-Ireland champions were up against it.

Though Cotter extended Cork’s advantage within seconds of the resumption, Kilkenny, who introduced Denise Gaule for the second half, shot the next six points to put some daylight between the sides.

Quilty doubled her own personal tally with three more successful shots from frees, Gaule converted another from distance and as Dalton shot two more points, they established a 0-12 to 0-8 lead.

Kilkenny failed to score in the last 12 minutes plus three of additional time but Cork needed a goal and all they could manage was a point from Julia White so it was the Black and Ambers who progressed.

The conditions were similarly difficult in Birr as in Waterford but for the fifth consecutive year, Limerick fell at the penultimate hurdle.

It was the manner of the defeat that will grate with both players and manager Declan Nash however, as they followed an unbeaten group phase with a limp performance against a powerful Galway unit.

Niamh Hanniffy, who has had a tremendous start to the year not just for county but with the University of Limerick in their successful Ashbourne Cup campaign, carried on her goal-scoring run with an early major for Galway to lead by 1-2 to 0-0 after just four minutes.

Niamh Mulcahy converted a free in the seventh minute but there was absolutely nothing for the Shannonsiders to take from the opening half as they were blown away by Galway.

Four pointed frees by Carrie Dolan and a pair from play by Noreen Coen propelled them to lead, with Ailish O’Reilly and Niamh Kilkenny also on the mark to make it 1-8 to 0-1 at the change of ends.

Rebecca Delee was denied a goal that Limerick desperately needed early in the second half by Galway netminder Sarah Healy.

O’Reilly, who like Hanniffy has enjoyed a strong league to date, grabbed Galway’s second goal mid-way through the second half as the torment continued for Limerick.

The scoring rate dropped as Cathal Murray emptied his bench but Limerick were still unable to register even one score from play, Mulcahy providing their four points.

In contrast, Galway had six individual scorers. O’Reilly was a constant threat and finished with a goal and four points, three of those points coming from frees, while the ever-industrious Ann Marie Starr and Coen also added scores in the most comprehensive of victories.

The relegation play-off between Offaly and Wexford scheduled for Coolock, did not take place as scheduled, with Wexford refusing to play with both teams in attendance.