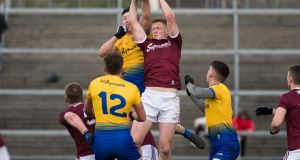 Galway gave themselves a chance of reaching the Division 1 final for the second year in a row after Danny Cummins led them to victory over Roscommon at Pearse Stadium.

As well as an in-form Cummins hitting 1-2 for his side, Galway saw Shane Walsh and Antaine Ó Laoí kick four points each to lift their hopes of another shot at silverware.

This was a poor performance from Roscommon though, who now need a positive result against Kerry next weekend to avoid relegation.

With wind advantage Galway led by two points early on when Cummins and Gareth Bradshaw pointed following a couple of bad wides from Roscommon, but the visitors hit back. A goal looked likely when Enda Smith tried to lob Ruairi Lavelle in the eight minute but the Galway goalkeeper got back to tip the ball over the bar, while Tadhg O’Rourke levelled matters a minute later when he broke through Galway’s defensive line.

The pace of Antaine Ó Laoi saw him put Galway a point ahead before Ciaran Duggan also got his name on the scoresheet for the home side, and despite a rare score from Conor Daly, Galway started to pull clear.

Shane Walsh curled over a brilliant point for Galway to put them 0-5 to 0-3 clear, while Gary O’Donnell stretched their lead soon after.

Galway should have been much further ahead at that stage - Walsh missed the easiest of frees from 13 metres, Heaney was denied a goal by Lavin, and Cummins had a shot come back off the post - and at the other end Roscommon stayed in touch thanks to a couple of Conor Cox points and a Donie Smith free.

But two minutes from the break Cummins fired to the net after John Daly’s smart pass, which gave his side a 1-11 to 0-7 lead at half time.

Galway started the second half brightly when John Daly and Walsh points, but after a Colm Lavin 45, Roscommon were thrown a lifeline when Shane Killorna’s shot was stopped with a footblock, and Cox converted the penalty.

Galway responded with a free from Ó Laoí after Conor Daly pulled down Walsh - he wasn’t black carded - while Roscommon began to find scoring difficult at the other end and their wides tally hit double figures.

Niall Daly was black carded late on as Roscommon finished with 14 players but this was a formality for the home side. Galway play Tyrone next weekend, and are currently in the league final places - two points behind Kerry and two ahead of Dublin. Both play later on Saturday.