Galway take over in second half to beat Wexford 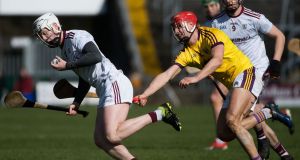 Cathal Mannion, Niall Burke and Tadhg Haran all scored goals in a convincing second half performance as Galway progressed to the hurling league semi-finals at Pearse Stadium.

Conor McDonald hit the net twice for Wexford in the first half, and Lee Chin also goaled before the interval, but after Joe Canning’s brilliant free taking display kept Galway in touch and a strong third quarter swatted aside Davy Fitzgerald’s outfit.

Playing into a very strong wind Wexford got up and running when McDonald pointed, but Canning hit his only point from play after that to level matters. A Chin point pushed Wexford ahead again, but Galway - and Canning - took over from there to the interval. Canning hit 12 of Galway’s 13 points in that first-half with Cathal Mannion’s point six minutes from the interval their only other score.

Wexford meanwhile made hay with some long deliveries into the Galway fullback line. Their first goal was finished and created by McDonald, whose ground stroke wormed its way past Fergal Flannery, and although Canning reclaimed the lead from frees, Wexford pulled clear again when McDonald hit the net via the post in the 24th minute.

Chin’s goal after half an hour meant Wexford were 3-5 to 0-13 ahead at the break, but Galway started the second half brilliantly.

Cathal Mannion hit the net from a tight angle in the 38th minute, while Niall Burke poked home their second in the 44th minute. Galway were totally dominant as Wexford relied on Paul Morris frees, while Haran’s last minute goal came with the win already secured.