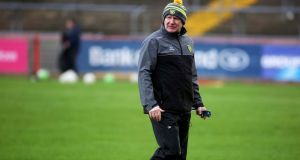 Donegal’s promotion received a timely boost after a strong second-half showing kept Cork rooted to the bottom of Division 2 at Páirc Uí Rinn on Saturday.

Backed by the wind, the Ulster side outscored 12-man Cork by 1-13 to 0-4 on the resumption, hitting 1-4 without reply in the closing stages as the hosts lost captain Ian Maguire and Luke Connolly to injury and Mark Collins to a second yellow, having used all five substitutes.

The goal came in the 35th minute, when Ruairi Deane soloed through the defence only to be denied by keeper Shaun Patton. Wing-back Mattie Taylor followed in, though, to give Cork a five-point advantage.

Collins increased it to six on the resumption, but it was all Donegal after that as Hugh McFadden bossed midfield and Michael Murphy and Niall O’Donnell kicked a succession of points.

Cork were struggling to get the ball beyond half-way as the defence came under sustained pressure.

They still managed to be on level terms following a Connolly free after 62 minutes to tie matters at 1-12 to 0-15. The home side wouldn’t score again though as Donegal seized control once again.

O’Donnell fired over two and substitute Daire O Baoill another entering six minutes’ injury-time. Donegal made the game safe with their goal in the 75th minute.