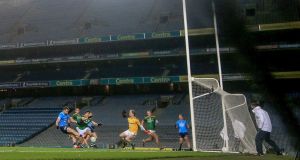 On a sombre Saturday night in Croke Park, Dublin forged their way farther into history with a 10th successive Leinster title. The provincial football final always had the likelihood of becoming a sideshow to the haunting ceremony, commemorating those who had died in the stadium 100 years previously and so it proved.

The All-Ireland champions laid a wreath at the Hill as their mark of respect and both teams observed a minute’s silence. The match started in the echoing emptiness of this year’s championship matches and as a contest, wilted as early as the eighth minute when Dean Rock arrowed his shot into the same goal to turn a level match into a 1-2 to 0-2 lead, which only became more enormous as the night wore on.

Ciarán Kilkenny posted another good performance, scoring 0-4 from play and the defence was assured and largely impenetrable.

There were concerns for manager Dessie Farrell in Jonny Cooper having to be withdrawn at half-time injured and in the late red card given to Cormac Costello, apparently for verbal abuse of a linesman. In two weeks’ time the Ulster champions, Donegal or Cavan, will be in Croke Park for an All-Ireland semi-final.

It mightn’t be any consolation to Meath – and wasn’t judging by their manager Andy McEntee’s demeanour afterwards – but this was Dublin’s best performance of the championship, a fluid display of confident ball retention and forward movement that the challengers simply couldn’t contain.

Meath came into the match, buoyant with the promise that an improving young team had laid down enough markers since losing last year’s equivalent contest by 16 points. They’d had a creditable season in Division One even if it ended in relegation and had been scoring well in the matches up until Saturday.

But for those keeping an eye out for comparative data, the early raid on Dublin’s goalmouth that saw Cillian O’Sullivan cut in and pass to Bryan McMahon only for the latter to get shut down by the defence and leave Meath captain Bryan Menton to hoover up a point.

A first-minute goal would have been a great lift for the team and the first such score Dublin would have conceded in two years in the province.

Meath played with a bit of spirit and turned over James McCarthy for an eighth-minute point but that would be it for more than half an hour by which stage the match was as far beyond their grasp as the moon.

The problem with last year’s Leinster final for Meath was that whereas they defended admirable and created a bucket of chances, they managed just a point by half-time and trailed 0-1 to 0-5. They have doubled the score this time but the defence got taken for 2-12.

They also needed a good return on their kick-outs but whereas Dublin captain Stephen Cluxton was perfect in the first half, his opposite number Mark Brennan had his restarts under constant pressure and a good third of them went astray, to be processed into scoring opportunities.

Again all of Dublin’s starting forwards scored from play in the first half – Seán Bugler got off the mark when he charged down the middle of the defence, played a one-two with wing back Robbie McDaid, who had an adventurous final, and palmed to the net for 2-8 to 0-2.

In the second half, Farrell restored two of the heavy hitters off the bench in Brian Howard and Paul Mannion but the scoring urgency abated a little.

Meath refused to give in but in boxing it would have been stopped. There were however some good cameos from replacements. Joey Wallace’s pace caused a couple of problems and he kicked a mark. Jason Scully also looked lively when he came on and the promising Jordan Morris came into the match more prominently, kicking 0-4 in the second half, two from play.

As the match petered out, it took an old hand to put a bit more pain on the scoreboard for Meath. Kevin McManamon came on in the 65th minute and by injury time was able to launch one of those familiar bursts through the defence but Brennan saved his shot only for Niall Scully, with one of his familiar follow-ups, to smack in the third goal and final score.

It was Dublin’s biggest win over the neighbours since the 1955 Leinster final when the margin was 20. That year ended in legendary disappointment for them, something they’ll be hoping to avoid this time around.