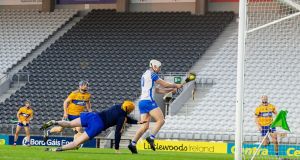 A superb goal salvo by Ballygunner’s Dessie Hutchinson, in addition to outstanding displays by Stephen Bennett and Calum Lyons sent Waterford into a first All-Ireland semi-final since 2017 as they saw off Clare by nine points at Páirc Uí Chaoimh.

Despite an excellent performance by Aron Shanagher, the Banner’s hopes were dented after it emerged that the in-form Tony Kelly had rolled an ankle in the pre-match warm-up, according to manager Brian Lohan.

At the end of a breathless first half, Waterford led by 3-10 to 2-10, with Hutchinson and Shanagher netting a brace of goals at either end.

Thirty seconds later, Kelly, patrolled tightly by Calum Lyons, got Clare off the mark while a superb David McInerney sideline cut brought the sides level by the fifth minute. But a minute later, Hutchinson goaled again, latching onto Stephen O’Keeffe’s deep delivery to rifle the ball past the diving Quilligan.

Following fine support play by Jamie Barron, Kieran Bennett opened his account with a 10th-minute point only for Kelly to convert a free from the subsequent Clare attack.

But two successive Stephen Bennett frees and a second score for his brother Kieran pulled Waterford six points clear and seemingly in command by the 13th minute.

But Clare pulled back two points prior to the first water break through a Kelly free and Cathal Malone to leave Brian Lohan’s men 2-5 to 0-6 down.

It was the Banner who steamed out of the blocks upon the resumption, with Aron Shanagher zipping the sliotar beyond O’Keeffe following great support play from Ryan Taylor and David McInerney.

Shanagher goaled again in the 20th minute, brilliantly retrieving a high ball, breaking clear of Conor Prunty and slamming the ball home to send Clare a point ahead. But Waterford promptly responded through Austin Gleeson and Stephen Bennett to edge back in front by the 23rd minute only for a Clare purple patch to yield points from Shane O’Donnell, Shanagher and Kelly (a free) over the following three minutes.

The game continued to flow brilliantly, with Liam Cahill’s charges restoring parity by the 29th minute thanks to another brace of Stephen Bennett points. Kelly turned over another free in the 33rd minute only for Waterford to goal again through Jack Fagan following Hutchinson’s superb cross-goal pass. Kieran Bennett’s stoppage-time point left Waterford at goal clear by the break.

Stephen Bennett and substitute Neil Montgomery landed the opening scores of the second half before Kelly produced another of his trademark 2020 Championship points in the 41st minute.

Malone turned over another fine point 90 seconds later only for the outstanding Hutchinson to immediately reply at the opposite end.

Kieran Bennett sent Waterford five clear just shy of the 45th minute only for Clare’s Ryan Taylor to point from the Banner’s next attack. Tadhg De Burca and Kelly (a free) traded points in the 51st and 52nd minutes before Jack Fagan steered over a superb point from deep on the right flank.

Gleeson and Barron were next to score, leaving Waterford seven clear after 55 minutes but Clare were far from finished, with centre back Aidan McCarthy charging onto a brilliant cross-field pass to slam the ball low to the left of the diving O’Keeffe.

Kelly, Malone and David Reidy added to Clare’s tally in the closing minutes while Darragh Lyons became the fifth Waterford replacement to point in the fourth additional minute as they move on to a semi-final meeting with Kilkenny at Croke Park next Saturday.