Cox calls for a more relaxed transfer regime in the GAA 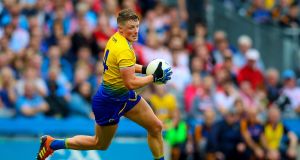 Conor Cox: “If people did have aspirations to play county with another county and it suited them work-wise and living-wise . . . the GAA that could maybe make it a little bit easier.” Photograph: Tommy Dickson/Inpho

Conor Cox now lives and works in Carrick-on-Shannon. He plays his county football just over the Leitrim border in Roscommon, the birthplace of his father, and plays his club football at home with Listowel Emmets in Kerry, the county he also played with between 2012 and 2017.

Last year, he won his first Connacht title in his first season with Roscommon, finishing as the county’s highest championship scorer with his 0-29 plus an All Star nomination, to go with the Munster and All-Ireland Junior titles he won with Kerry in 2012, 2015 and 2017, scoring 4-64 in 13 games across those three campaigns.

Cox, now 26, also played seven national league games for Kerry, four as a sub, between 2013 and 2016, scoring 0-13, his last appearance, with gentle irony, coming as a substitute against Roscommon. He was also UCC’s top scorer when they won the Sigerson Cup in 2014.

If all that’s not too confusing, Cox also makes the case for the increasingly transient nature of the modern Gaelic footballer, and reckons it’s time for the GAA to revisit their rules on player residency and transfers.

“Last year, I didn’t really understand it, and suppose didn’t do enough research in the first place to know anything about transfers,” says Cox, who will miss Roscommon’s opening games in Division Two of the Allianz League due to a hand injury. “I just thought it was a matter of moving because I did have a parent up there but there seems to be other blockages along the way.

“I suppose the way society is these days and with people moving to other parts of the country for work, that maybe the GAA should possibly look into something like that because it’s seldom now a person is living and working in the county they grew up. So maybe it’s something that could be a small bit more relaxed.

“Dublin would be a big one, Cork would be another one, Galway have a number of players, and even the club scene in Kerry is very busy so it is something that if people did have aspirations to play county with another county and it suited them work-wise and living-wise . . . it could be looked into the GAA that could maybe make it a little bit easier.”

Indeed his transfer to Roscommon last winter appeared a little more complicated than it should have been. Unable to secure any regular game time with Kerry under then manager Eamon Fitzmaurice, he looked to his Roscommon connections, his father Martin originally hailing from the Éire Óg club in Roscommon, briefly emigrating to America, before returning to live in Kerry. Cox’s mother Anne is a native of Moyvane.

Initially Cox transferred to Éire Óg, but the club championship structure meant he would have been ineligible for the county until after this summer; only then did he realise was eligible to play for Roscommon under the parentage rule so he actually transferred back to Listowel Emmets.

Once new Roscommon manager Anthony Cunningham was in charge, the call came through and the move was complete.

“It was the first weekend in December, 2018. At the time I got the phone call, I wasn’t playing inter-county football, I wanted to grab it with both hands to be honest, I thought it was a very good opportunity.

“I would have been going to a lot of Roscommon matches over the last number of years with my Dad, he’d be a very big Roscommon supporter. We would have always been heading up to matches and that. Up until last year I wouldn’t have had any contact with the team or the county board or anything like that. Personally I think I’d have been very foolish to turn it down.

“I suppose on the drive down to training the first night I was very apprehensive in the car, thinking what might happen and what might not happen, as you would be like with any aspect of life, meeting new people.

“No, it was very seamless, in fairness the lads are very friendly, all the team and management and county board made it very, very easy for me. They kind of looked after me in a way because I was so new to the set-up. So yeah it was seamless and I’ve made some great friends over the year or so.

“It was just the rulings behind transfers and certain things that could be done and couldn’t be done. I suppose maybe the fact that I was transferring on a parent basis, I thought maybe a bit of common sense should have prevailed. But it didn’t at the time. Look, we got there in the end, and with lads working in different counties and living in different counties it’s something that may come in more openly in future.”