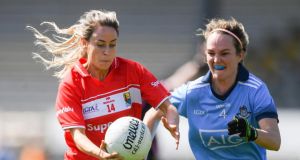 Orla Finn of Cork faces off Rachel Ruddy of Dublin. Both teams are gearing up for this year’s season of women’s football. Photograph: Piaras Ó Mídheach/Sportsfile

“Fire in the heart and fire in the belly”. That is how Ephie Fitzgerald and his Cork women’s football team would describe their 2020 campaign. There is no doubt the Cork team will want to put their name back on the Brendan Martin Cup.

For context, it’s important to look back to last April and last August. Last April, Cork were a bit stuttery and jittery in the league, having been without prominent Mourneabbey stars, who had won a first senior All-Ireland.

So Ephie Fitzgerald was left to trial new blood. With star forward Saoirse Noonan out with a knee injury, it was a chance for fresh faces to prove their worth. After a couple of games that provided them with mental blocks (a game in Páirc uí Rinn against Tipperary showed how porous Cork’s defence can be), Cork got it together and had their date with redemption against Dublin in the league semi-final.

Everyone knows that Cork playing Dublin are games for the ages, and that ridiculously warm Sunday in April in Kilkenny was a day to remember. Orla Finn notched 13 points for Cork and speedy wing back Melissa Duggan bagged herself a goal to essentially seal it for Cork, in a game that went to extra time.

We all know what happened next. Cork went on to win the league and left Mick Bohan a bit of time to plot and prepare for his championship season ahead. Sinead Goldrick was returning to the fold after missing some of the league with a broken wrist and Dublin were possibly a little bit disappointed by their young guns who failed to properly light up.

Now to August 2019 and a historic day for women’s football. The Ladies’ Gaelic Football Association were granted Croke Park for a double-header semi-final, which saw Galway face Mayo and Cork square off against Dublin.

That really was the day we saw a slight gap between Dublin and rest. Being so economical with the ball, strong off it and not afraid to recycle and break down defences, Dublin proved they were worthy All-Ireland champions. They won in nearly every sort of environment after a washout final against Galway in Croke Park.

To say Ephie Fitzgerald was a bit dramatic is an understatement. While Fitzgerald would say his mind was made up months before, he spectacularly quit after the semi-final loss against Dublin. But, on second thought, he decided to have one more crack at the whip.

While longevity in coaching isn’t usually the norm in today’s game, Ephie Fitzgerald has a chance to grow something special. With talent in Cork’s youth teams (the under 14s won everything around them, while the under 16s are also improving year-on-year), Ephie knows what is coming down the pipeline.

If Ephie Fitzgerald and his team want to recreate one of the greatest women’s football teams of all time, he’s going about it the right way and with the right structures. Mourneabbey have proven once again that they are the crème de la crème when it comes to women’s club football, while also providing an endless supply of footballers.

With commitment and love for the Cork jersey, 2020 is going to be another year of development for Cork squads. As ladies football benefits from male coaches transferring over and bringing in-depth tactics, women’s football teams are now taking on proper strength and conditioning structures. That is probably why Dublin are the most advanced and at a higher level. The fitness levels are phenomenal when compared with teams from the last few decades.

While Dublin remain the pinnacle and the standard-bearers for 2020, they’ll have to contest the league without two of their main engines in Niamh McEvoy and Sinead Goldrick, who are currently on AFLW duty with Melbourne FC. No doubt Mick Bohan had a contingency plan in place, but they are significant losses for the reigning All-Ireland champions.

So, as the new season begins this weekend, all eyes will be on the double-headers and there is probably no better place to start than Páirc Uí Chaoimh. It’s a stadium that provides Cork fans with all kinds of emotion, from the awkward blunders over the last few years, to the season highs of years gone past. Now, for the first time ever, female footballers will etch their names in history and play their first ever game on Páirc Uí Chaoimh soil against Westmeath, who recently got relegated to the All-Ireland Intermediate Championship.

It’s official, women’s football is back, and it looks like it’ll be better than ever.