Kingdom get their National League campaign underway on Saturday against Dublin 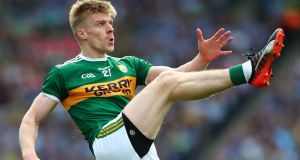 Tommy Walsh knows that ultimately Kerry will be judged on what they do this summer. Photo: James Crombie/Inpho

Another year in the Kerry jersey is upon Tommy Walsh, as his third stint moves into added time. Next month he’ll turn 32 and, for a man who has endured more than his fair share of injuries, including rupturing hamstring tendons in his time playing Aussie Rules, there’s no sign that the aging process has impacted at all, at all. The lad could be straight out of Tír na nÓg for all we know.

Walsh knows the truth, though. As another Saturday night under the Croke Park lights beckons for the latest edition of the Kerry-Dublin rivalry, Walsh might or might not start the first round of the Allianz League, or he might or might not be used again off the bench as a go-to supersub. “There’s always the bangs and the aches and pains you’re going to have once you go north of 30 but I feel pretty good, I’m available to play and hopefully I get a bit of game time,” he says .

What’s different this time, some five months on from losing out to Dublin in the All-Ireland Final replay, is that Walsh and co have a new on-field captain in David Clifford, who turned 21 this week. “If you were to select a captain, the only thing that would come against David is his age. But if you were to put that aside, he would be in the mix anyway. He is a strong character in the dressing room, he is a good football brain obviously and he deals with pressure situations extraordinarily well. There has been a lot of pressure on that guy since he was what, 15? 16?, coming through and he has dealt with it as good as you could expect a young guy to deal with it and I am sure he will do the same with this.

That Walsh is playing at all is something of a tribute to his physical and mental resilience. On taking a full year’s rehabilitation to recover from those tendon ruptures, subsequently returning from Australia and then seeing his second stint in a Kerry shirt prove short-lived due to recurring injuries, the 6’6” Tralee man’s third coming came at the behest of manager Peter Keane with a phone call towards the end of 2018.

“Kerry wasn’t even on my radar to be honest. I had put that behind me, I was getting on with my life and I was fine with that. I was happy. I was doing other things. I was very surprised to get the call from Peter towards the end of 2018 for me to come in and join the Kerry scene. There was no guarantees from Peter’s end. I just said to myself, it’s an opportunity, I might in five years time look back and ask why I didn’t do it. It was only when I went in, said I’d go in for 12 months and give it a go and if not at least I knew then that my body wasn’t up to it. I am glad I went back in. Last year, while it was disappointing at the end, there was a lot of positive aspects to it too and I was glad I was able to contribute to it.”

That it went down to the wire, losing an All-Ireland Final replay to Dublin, left a hollow feeling. “Dublin are obviously the benchmark, five-in-a-row is a huge achievement for them obviously. While you don’t necessarily like them, you do have huge respect for them. They have been a fantastic team, they go about it in a right way and, as I’ve said, they have been the benchmark and there is a group underneath them, the likes of ourselves, Mayo, Tyrone and a couple more, that are trying to bridge that gap.

“We nearly got there last year, we nearly got over the line and nearly isn’t good enough. There is a big difference between drawing with Dublin and going that extra step and beating them. Hopefully the lads, and the older fellas myself included, will have learnt a lot from last year. We need to get better and a lot of guys need to take another step in the right direction, to contribute more and more and more and hopefully with that combined effort it will get us there. It isn’t just Dublin we have to worry about, there’s a lot of other teams that we will be trying to improve on also. While they are the benchmark and the team to beat, there’s a lot of other teams to worry about there as well.”

Walsh – who works as a tax advisor with CDS Law & Tax based in Cork – was speaking at the launch of the Lidl Comórtas Peile Páidi Ó Sé 2020 tournament which takes place next month. Come Saturday evening, he’ll be part of Kerry’s return to HQ for the start of the league campaign.”Playing Dublin in Croke Park is always a great occasion. We’re excited, it is a good test for us and, while we haven’t done as much work as we’d like at this stage, it gets the juices flowing again.

“I wouldn’t say there is points to prove. The National League, while it is a very important competition, and a national competition, at the end of the day we will only ever be judged on how we do in the summer. We will be going hard at the National League, trying to win as many games as we can, but it is as much about getting ready for the summer, getting good performances, getting conditioning into guys to be ready for when the summer arrives.”

*The Lidl Comórtas Peile Páidi Ó Sé 2020 is an international adult men’s and ladies’ club Gaelic football tournament – involving 36 teams, including teams from Ireland, the USA and Britain – which will take place on the Dingle peninsula from February 21st-23rd. It is the 31st edition of the tournament, founded by the legendary Kerry footballer and continued in his memory by his family.

Bad weather wreaks havoc with hurling league format again 05:29
Irish Open: How to get there, how to get tickets, where to stay 05:00
Fermanagh fundraising chairman questions ‘equality’ of GAA 05:00
Mike Blair expects Italy will face a ‘confident’ Stuart Hogg 01:00
Robin McBryde: Farrell will be judged on results, not style 01:00
Here is your handy guide to sport on television this week