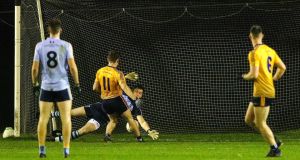 DCU’s Michael Brannigan has his penalty saved before scoring the rebound against UCD. Photograph: Brian Reilly-Troy/Inpho

David Garland turned on the style for DCU with a commanding display to help secure an Electric Ireland Sigerson Cup final place for the tournament hosts.

Paddy Christie’s side will go into next Wednesday’s decider as strong favourites after backing up their quarter-final demolition of Queens with another strong performance.

There were strong performances too from Dublin duo Evan Comerford and Paddy Small with goalkeeper Comerford expected to replace the injured Stephen Cluxton for Dublin’s Allianz League opener against Kerry at Croke Park on Saturday.

Shane Carthy, who featured for Jim Gavin’s Dublin in 2018 and has stated his desire to return under Dessie Farrell, impressed also, kicking a point and helping to set up the goal.

It was Carthy’s long ball in that Garland caught before being fouled for the penalty that Bannigan converted, albeit at the second attempt after an initial save.

DCU were 0-7 to 0-2 ahead at half-time and that goal four minutes later put them into a 1-7 to 0-3 lead which effectively killed the game.

UCD, who came through a couple of punishing battles to reach the last four and were without the injured Con O’Callaghan, didn’t score again as DCU reeled off 1-8 without reply in total in the second-half.