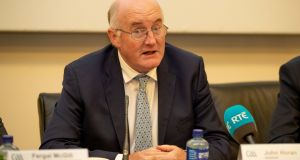 It was the failure of that to engender better behaviour that triggered Monday’s decision by the GAA’s management committee to suspend immediately and indefinitely all club activity.

Speaking to RTÉ on Monday evening, Horan explained that the association felt that it had no option after further social media evidence of celebrations in clubs that did not observe public health guidelines.

“[We felt we had] no choice but to shut things down,” he told Marty Morrissey. “We did communicate during the week but felt that that message just wasn’t taken on board.

“Dr Glynn and myself had a conversation during the week when he asked me to ask for extra compliance throughout the organisation. Based on that we sent our communication out to the membership. Unfortunately we didn’t get what we required and we are where we are.”

Asked could action not have been taken earlier given the many examples of misbehaviour and the rising number of cases, the president said that they had tried to address the problem.

“We were working in the background, aware of the problems and asking people to take on board where issues had arisen and improve the performance but we felt today was the day when we had to take the hard decision.”

Substitute Foden resuces a point for City at West Ham 15:02
‘The knee felt perfect’ – Dan Leavy on cloud nine after long-awaited return 13:42
Heartbreak for Tuohy and O’Connor as Tigers down Cats 13:14
McIlroy well off pace as Thomas leads low-scoring Zozo 10:24
Seán O’Brien: Anger over my parents’ break-up never left me 09:30