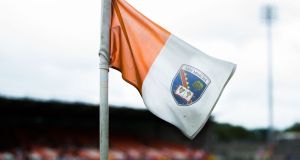 Armagh has suspended football training after an outbreak of coronavirus. Photograph: Tommy Dickson/Inpho

Armagh footballers have had to suspend training because of a number of players testing positive for coronavirus. The news emerged just as there was confirmation that Northern Ireland had recorded in excess of twice the previous highest daily rate of positive tests with 934.

Later on Friday it was confirmed that all club activity was suspended with immediate effect in the county.

This will be a concern for the GAA with the intercounty season just two weeks away. Armagh is the second county after Donegal to have to stop training because of a Covid-19 outbreak.

Armagh are due back in action with a top-of-the-table Division Two league encounter with Roscommon on October 17th. A week later the county is scheduled to face Clare and the Ulster championship campaign begins on November 1st with a trip to Derry.

An official statement form the county was released on Friday.

“Following a recent outbreak in a local club, the Armagh senior football team has a number of confirmed positive results for Covid-19.

“We are strictly following the GAA and public health advice and as a precautionary measure we have postponed collective training.

“These are difficult times for our communities and Armagh GAA urge all members to follow the public health guidelines.”