Athy pip Moorefield to wipe away nine years of hurt 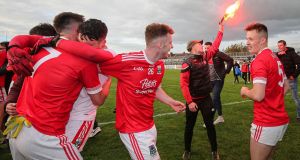 Danny O’Keefe was the toast of the town of Athy after he scored a crucial, match-winning 54th minute goal as his side overcame Moorefield to win their first Kildare SFC title since 2011 in Newbridge.

Athy have spent nine years looking to get back to the pinnacle of the game in Kildare and have endured some difficult years since but those moments of pain were wiped with one swing of O’Keefe’s boot.

O’Keefe was an unlikely hero for Athy, indeed they were on the ropes when star forward Niall Kelly limped out of the game but O’Keefe came in and stole the show.

It was a story of goal chances because, although Athy were the better side overall and deserving winners by the end, Moorefield will look back with regret over three missed goal chances. Liam Callaghan shot wide from a great position in the first half, Ciaran Kelly struck a post in the half and then Eanna O’Connor was denied by an excellent save from James Roycroft.

All those chances came before Athy fashioned their first chance of a goal but when their moment arrived, O’Keefe finished with aplomb and once back in the lead they never it go.

Athy had started the game brilliantly and with the wind at their backs scored the first four points of the game inside the opening 11 minutes but gradually as the half wore on, they missed chances to go further and Moorefield found a way back into the game.

Athy led 0-6 to 0-3 at half time but by the time of the second half water break, Moorefield were back level at 0-8 each.

It seemed the game was shaping up as Moorefield would have liked and it looked like they were kicking for home when O’Connor put them ahead for the first time at 0-9 to 0-8 in the 51st minute and then again at 0-10 to 0-9 in the 53rd minute.

But the O’Keefe goal came at the most opportune moment for Athy and they were able to protect their lead in the latter stages, Moorefield’s cause not helped by a second yellow card shown to Cian O’Connor, to seal a memorable win for the club.